US Soccer Federation Tries To Dunk On The Women, End Up Getting Posterized By The Men 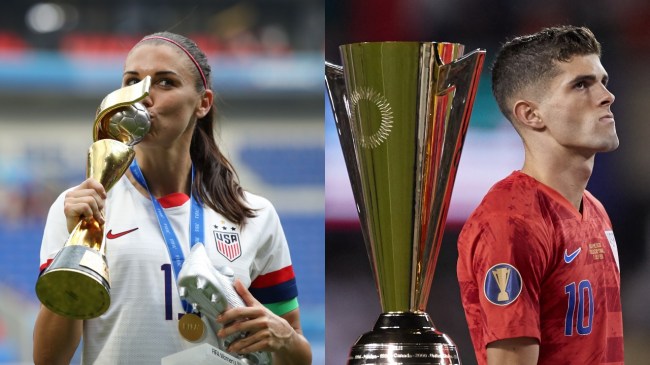 If you’ve been living anywhere except under a stadium-sized boulder this summer, then you’ve likely heard about the ongoing lawsuit between the United States Women’s National Team and their employers, the United States Soccer Federation.

The gist of the lawsuit is this: the United States Women’s National Team believe they are underpaid and feel they deserve better treatment, especially considering they’re a far more successful team than the men.

In an effort to tell their side of the story, US Soccer Federation president Carlos Cordeiro released a statement on Monday attempting to outline how the women are actually paid more.

My letter and fact sheet to our soccer community about the @USWNT lawsuit. We’re committed to doing right by our women’s players, and I’m optimistic we can get this done. https://t.co/5bzV4KRFdm (1/2) pic.twitter.com/GYYnPH1Z7c

Needless to say, the soccer community was — once again — far from thrilled with US Soccer’s response to the issue.

Then, to make matters worse for the federation, the United States Men’sNational Team threw their hat in the ring to mercilessly dunk on Cordeiro and the US Soccer Federation’s “letter and fact sheet”:

The USMNT players union has a statement on yesterday's US Soccer letter on pay for the WNT/MNT that you may not have expected. pic.twitter.com/U47XEqHHh5

The United States Men’s National Team further aligning themselves with the women’s team can only be beneficial, as A) they bring further attention to the issue, and B) they’re also American soccer players and therefore have a very unique, and insightful, perspective on why the USWNT deserves equal pay.

With soccer only growing more and more by the day in this country, the more people who are aware of the issue, the better, as the United States Soccer Federation will likely eventually crack if the public pressure is substantial enough.