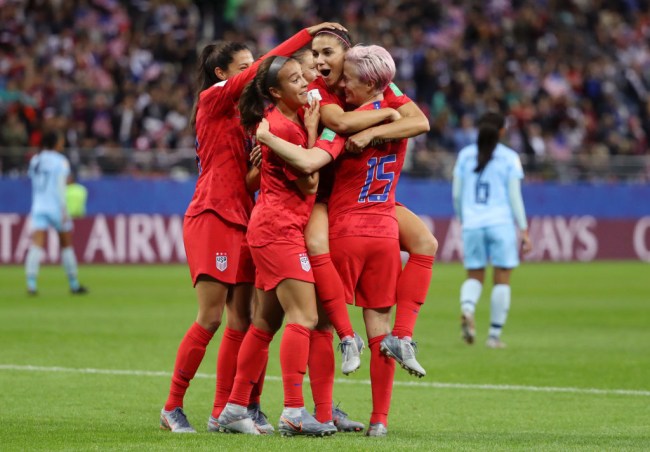 A bar was excited about Team USA competing in the FIFA Women’s World Cup. The bar was so amped up that they offered free shots whenever the USWNT scored a goal. That marketing campaign turned into a sloppy mess when the United States women’s national soccer team scored a record-breaking 13 goals. No official word on whether anyone survived the shot-a-palooza.

The American Social Brickell bar in Miami, Florida, offered a free shot of alcohol for every goal the US goal. This sounds like a fun little promotion. It’s soccer, how many shots could they have to give out? Three? Four? Five at the very most. It turns out that the bar was on the hook for 13 free shots.

Before the unprecedented 13-goal outburst on Tuesday, the first 11 games of the 2019 Women’s World Cup had an average of 2.27 goals per game. So this seemed like a wise marketing campaign.

Patrons of the bar enjoyed a nice buzz in the first half with three goals, but then they were probably fall-on-the-floor drunk after Team USA scorched Thailand for TEN goals in the last 45 minutes. Superstar striker Alex Morgan scored five goals, tying a Women’s World Cup record.

Then during the rout, the USWNT scored an incredible four goals in only six minutes. These many shots are venturing into the over-serving territory and opening up the establishment for possible litigation.

The Thailand players’ backsides must have been hurting from the ass-whopping, but let’s also consider how sore the wrists of the bartenders at the American Social bar were as well as the livers of the patrons at the bar.

Tuesday’s onslaught in France was the most lopsided blowout in World Cup history. This domination broke the record for margin of victory in a World Cup game (men’s or women’s) game. The previous record-holder was Germany’s 11-0 win over Argentina in 2007 (women).

The American Social Brickell bar tweeted about the 13 goals scored and the free publicity they received.

When the USA wins, we all Win! #sheBelieves

If you missed your chance to get alcohol poisoning, American Social is hosting watch parties for upcoming Team USA games including their next game against Chile on Sunday and on June 20th when USWNT takes on Sweden.

This will certainly be the soundtrack at the bar.