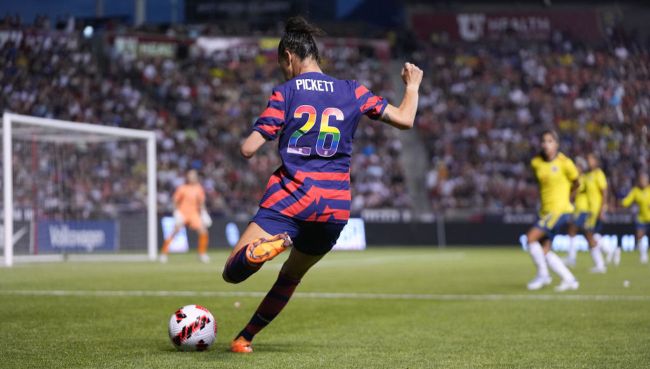 28-year-old defender Carson Pickett, who plays as a defender for the North Carolina Courage in the NSWL, made history on Tuesday night when she became the first player with a limb difference to take the field for the United States Women’s National Team.

Pickett started at left-back and played all 90 minutes in the team’s 2-0 win over Colombia. The United States found the back of the net via an own goal from Manuela Vanegas in the 22nd minute and a strike from Kelley O’Hara in the 77th minute.

Carson Pickett made history as the first player with a limb difference to play for the USWNT in their 2-0 win vs. Colombia on Tuesday 🇺🇸 pic.twitter.com/hequkELucy

“Carson did very well in training for us in last week and with the management of minutes for Emily Fox that we had, we felt like Carson would be a good replacement, and I’m happy that she was able to perform well for 90 minutes,” manager Vlatko Andonovski said following the match.

The major tournament in women’s football this summer is the Euros, which the United States obviously won’t be taking part in. Next summer, though, the USWNT will be seeking their third straight World Cup title at the 2023 World cup in Australia and New Zealand.