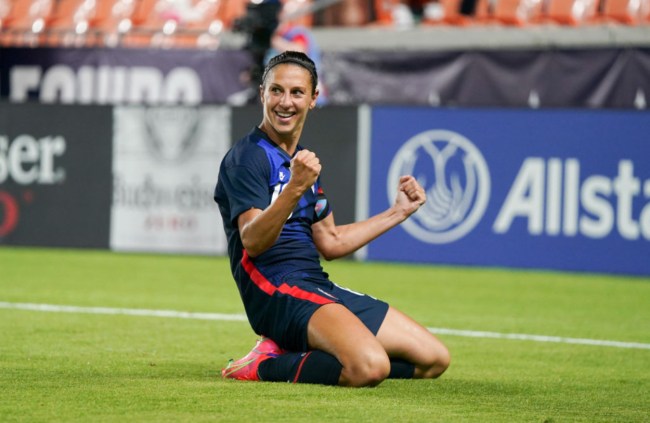 Carli Lloyd is not a fan of the recent culture of the U.S. Women’s National Team.

Lloyd recently joined former teammate Hope Solo on the latter’s debut episode of ‘Hope Solo Speaks‘ and did not hold back while describing the current situation within the national team.

The 39-year-old Lloyd retired from soccer in 2021, but admitted that it was tough for her to play the last seven years due to the culture shift.

“Even within our squad, the culture has changed,” Lloyd explained. “It was really tough and challenging to be playing these last seven years. To be quite honest, I hated it.

“It wasn’t fun going in. It was only for love of the game, really, for me.”

Following her chat with Solo, Lloyd joined the ‘State of the Union‘ podcast and explained that things turned “toxic” over the last several years.

“What we had in the last several years was not a good culture,” Lloyd explained. “The mentality changed and it became toxic and it wasn’t good.”

When The USWNT Culture Became “Toxic”

In Lloyd’s opinion, the mentality and culture of the team changed after the USWNT won the 2015 World Cup.

“I think what made this team so successful throughout the years is we stepped in between the lines and we fought for one another,” Lloyd said.

Winning the World Cup and players receiving endorsements weren’t the only things that shifted the culture within the locker room.

Lloyd believes a number of different things contributed to a shift in mindset and that players strayed away from actually playing for their country.

“I don’t think it was one particular thing, I think it was a number of things, but I don’t think the respect of wearing the crest and playing for your country, and doing everything in your power to fight for your teammates on the field was there,” Lloyd explained.

Lloyd, who competed for the USWNT since 2005, caught a tremendous amount of flack from soccer fans and media members during the Tokyo Olympics.

Ahead of the USWNT’s bronze-medal match against Australia, Lloyd was the only American player to remain standing as the rest of her team and staff took a knee in protest of racism and discrimination.

Lloyd also stood throughout the playing of the national anthem ahead of scrimmages and games in 2020 while the rest of her team took a knee in protest.

With Lloyd officially out of the game, it’s clear that she isn’t afraid to offer up her honest opinion about the state of USWNT.