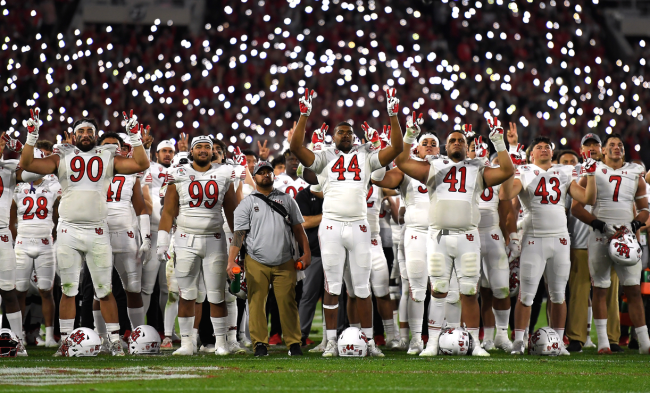 The Utah Utes football program is doing something very unique and very special to honor two recently deceased teammates, Aaron Lowe and Ty Jordan, for this year’s game against the USC Trojans.

Lowe, a cornerback, was shot and killed on Sept. 26, 2021 while attending a Salt Lake City house party. Jordan, a running back and the 2020 Pac-12 Offensive Freshman of the Year, was killed on Christmas Day 2020 from an accidental self-inflicted gunshot wound.

Both players attended the same high school in West Mesquite, Texas and were close friends.

When Ty Jordan died, Aaron Lowe switched his jersey number from 2 to the 22 Jordan had worn. He also was awarded the very first Ty Jordan Memorial Scholarship at the University of Utah. Less than a year later, he too was dead from a gunshot wound.

This year, the now renamed Ty Jordan-Aaron Lowe Memorial Scholarship was awarded to quarterback Ja’Quinden Jackson, a close friend of both fallen teammates.

“For the rest of my life, I’m going to rep your name,” Jackson said last year, a week after Lowe’s death. “I will never let your name die, bro.”

One way he and the rest of the Utah Utes football program will be doing just that are with custom hand-painted helmets with a portrait of Lowe on one side and Jordan on the other.

This will be the second time the Utes will have honored the memories of Jordan and Lowe with their helmets. On Nov. 26, 2021, for the game against Colorado, Utah’s helmets had a “22 Forever” imprinted on them.

The team adopted the slogan of trying to “be 22% better” last year and Utah retired the number 22 – the first time a number had been retired in the program’s history.

Many college football fans appreciated the Utes’ wonderful gesture in tribute of their two deceased teammates.

@UNISWAG Helmet of the Year locked in! The meaning behind this helmet is more impressive and impactful than any I’ve ever seen. An incredible tribute to two incredible individuals gone too soon! #GoUtes

No way Utah loses that game against USC now, right?

The result of the game was decided the second this came out. Utah by 22

The year 2022 is going to be very special for the Utah Utes football program.