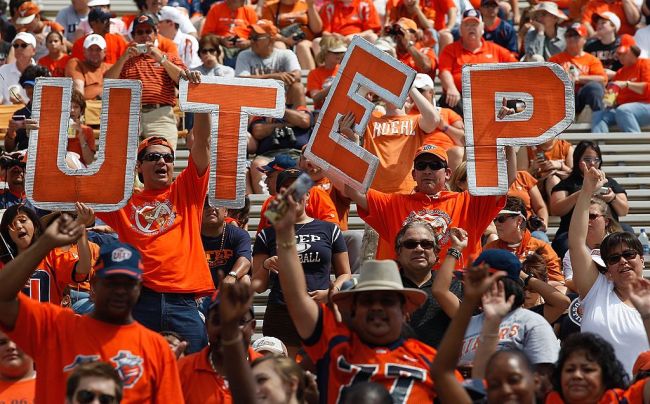 As the 6-2 Miners were set to host then the 8-0 Roadrunners, many fans around the country called for College Gameday to travel to the Sun Bowl for the biggest Conference USA game in recent history. Gameday chose to go to Cincinnati instead.

Meanwhile, UTSA was completely disrespected by the College Football Playoff Committee and omitted from the first rankings of 2021.

However, despite the neglect from Gameday and the CFP, ESPN did give the game some of the credit it deserved. Originally scheduled for a 2:15pm kickoff, the game was flexed to primetime so the world could watch one of the few remaining undefeated teams.

What ended up happening was ugly. Both on and off of the field.

Videos have since gone viral from the evening and they are absolutely wild. One video shows the parking lot tailgate completely devolve into chaos, as every object imaginable starts flying. It’s horrible.

Another shows a man get hit in the head with a can.

The craziest video, however, is EXTREMELY NSFW. It shows a man and woman fornicating in the bed of a pickup truck. They’re just absolutely getting after it.

Don’t just take my word for it. Go to @CapalotTury on Twitter, but be warned that it’s VERY NSFW.

Photos from the aftermath are equally as terrible.

Per multiple reports, UTSA fans were very gracious visitors and cleaned up their tailgating spots. That was not the case for the home fans, as you can see.

This will likely be the last time that UTEP ever hosts a primetime game, and the tailgate rules are almost certainly going to change. This is why Conference USA can’t have nice things.

Now, with that being said, RANK UTSA!