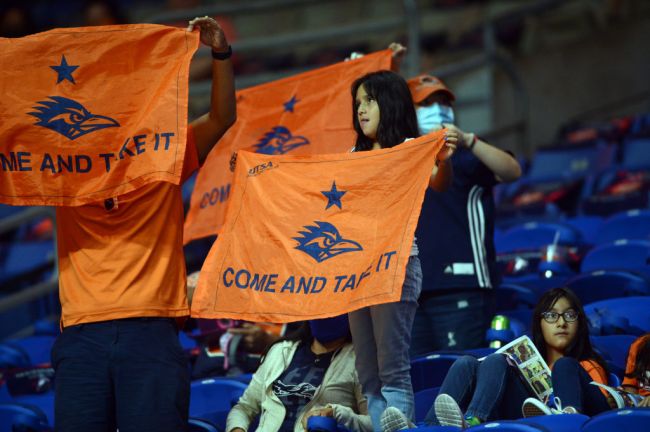 The University of Texas-San Antonio’s ‘Come and Take It’ phrase and tradition have been canceled after a petition raised concerns about the phrase’s racist connotation.

The tradition consisted of running a giant flag with ‘Come and Take It’ written across it and fans shouting the same words with the firing of a cannon in the fourth quarter of UTSA football games. The university’s president announced on Tuesday that the phrase will no longer be a part of UTSA tradition.

The phrase is also set to be removed from all UTSA digital platforms, licensed merchandise, and buildings around campus.

In 2011 UTSA was looking for a slogan to use, and an athletics staff member turned to the “historic Texas Revolutionary Battle of 1836” that happened in Gonzales, Texas. They believed the phrase would offer an inspirational call for fans to direct at opponents.

The petition alleges that the slogan carries white supremacist beliefs while also tying it to the January 6th insurrection at the U.S. Capital Building:

“Referencing the infamous flag from the Battle of Gonzales, this is a slogan that embodies both anti-Mexican and pro-slavery sentiments. It has carried those white supremacist beliefs from 1835 to today, and in that time has also been widely adopted by anti-government, pro-gun extremists, such as at the January 6th insurrection at the US Capitol.

The Petition Has Less Than 1,000 Signatures

At the time of this posting, 960 people have signed the petition online. UTSA’s enrollment is over 34,000 people and the city of San Antonio has a population of 1.5 million. Students weren’t the only ones to sign the petition, but say they were, that would mean less than 3% of the student body was in favor of canceling the tradition.

On top of the removal of the ‘Come and Take It’ slogan, the petition’s creator, a professor at the school, called for a public apology from both the president and vice president of the university.