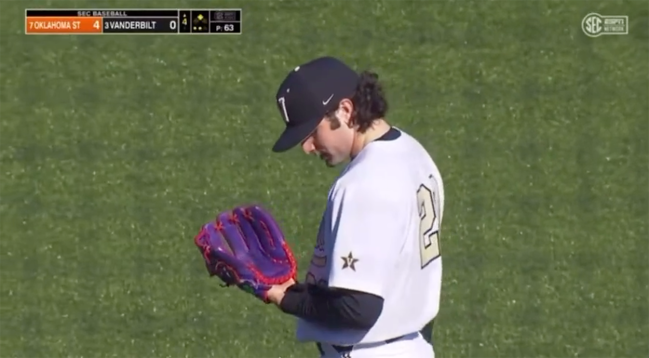 Opening weekend for the 2022 college baseball season began on Friday and Vanderbilt baseball is trying something new. The Commodores are trying to speed up the pace of play with new electronic, pitch-calling wristbands.

The unique way for a coach to call a game directly to his pitcher first went viral on Friday night. Nobody really knew what it was.

Vanderbilt appears to be using an electronic watch to deliver signs to the pitcher 🤔 pic.twitter.com/REtqj6UH5y

In years prior, something like what Vandy is using was not legal. The Southeastern Conference allowed electronics to be used for communication between players and coaches, but it was not allowed nationwide.

As a result, many SEC teams would use a walkie talkie set up to have coaches speak directly to their catches through an earpiece.

But during non-conference games and the postseason, it was not allowed. One-way electronic devices were against NCAA rules.

Back in August, the NCAA Playing Rules Oversight Panel approved allowing the use of one-way electronic communication devices for the purpose of calling pitches and plays. The rule went into effect for the 2021-22 academic year and teams around the country are taking advantage.

This is the first NCAA season where the technology is legal: https://t.co/uDS6w0qQsZ pic.twitter.com/yxN44d8xAO

Down in Nashville, Tennessee, head coach Tim Corbin and his program are taking a different approach. Rather than using an earpiece to communicate to the catcher, who would then communicate to the pitcher, the Vandy Boys are using the wristbands.

Every player on the field for the Commodores wears one of the wristbands and the catchers do not relay any signals, ever. Instead, the coach calls a pitch or a play through the electronic system and all nine players get the signal on their wrist as soon as it can make its way through the airwaves.

After they caught the attention of people watching on Friday, the broadcast broke down how the wristbands work on Saturday.

Here’s some explanation on Vanderbilt’s new electronic pitch calling bands from today’s SEC Network+ broadcast:
-All 9 players wear one
-Pitchers weren’t allowed to wear them before this season
-Vandy’s catchers do not give the pitcher any signs
-Goal is to enhance pace of play pic.twitter.com/O6tbJtqqIO

Baseball traditionalists absolutely hate the move, as they do with any changes to the game.

I would like to offer an obligatory curmudgeon response at this time: it’s too flashy, negates the aspect of protecting the signs & trying to (legally) steal them. Thank you for listening, please carry on.

Bastardizing the game. 15 seconds before the first pitch was thrown. No more nuance. Sad.

I HATE this… hate it. Theyve been using wristbands in softball for a while and to me it takes away part of the game and devalues catchers.
Its bad enough lineups and rosters are basically computer games at his point did this have to be too?

Hate this in every way….maybe old school, but let the catchers call the game

However, when push comes to shove, the wristband method streamlines the process and will likely be something that is utilized all across the country over the course of the next few years.