Vanderbilt Coach Says They Will Be The ‘Best’ Football Program In The Country; Fans Express Serious Doubt 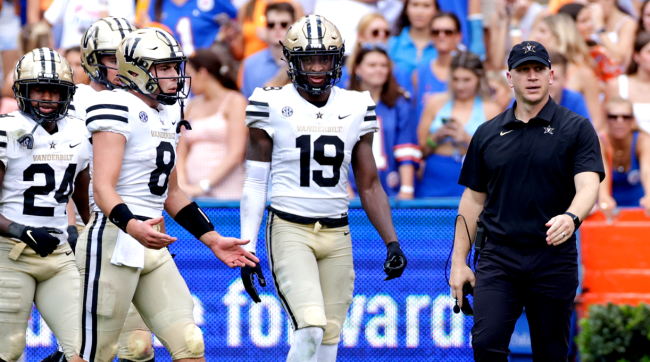 In sports it is very important to be confident. It’s a must if you want to succeed. Optimism also doesn’t hurt. But when that confidence and optimism bleeds over into being pollyannaish, it can become somewhat comical.

Such was the case on Tuesday at SEC Media Days when Vanderbilt Commodores head football coach Clark Lea took to the podium.

During his 17 minute opening statement, Lea stated, “With all the incredible things that are going on right now in Vanderbilt, the football program is certainly at a central point in that conversation. It’s their [Chancellor Diermeier and director of athletics Candice Lee] vision that unlocks my vision. Without their direction, their leadership, their energy behind our efforts, there’s no way we could reach as high as we’re reaching. But it’s because of their support that we’re aiming to build the best football program in the country at Vanderbilt University, where we have the best school in the best city in the best conference with the best facilities on the horizon.”

Solid goals to be sure, but then later on in his speech Coach Lea went and added, “We know in time Vanderbilt football will be the best program in the country.”

“As I said a year ago, there are no cheat codes, shortcuts, no hacks that will allow this to happen overnight,” Lea added. “This is still about going the long, hard way, independent of the trends and headlines generating the most attention right now in college football.”

Lea, who until taking over the Commodores football program for the 2021 season hadn’t been a head coach at any level, shocked many college football fans with his daring statement.

After all, Vanderbilt has gone 5-28 over the past three seasons (2-10 under Lea in his first year). They have only had four winning seasons since 1975 – a span of 46 years. The Commodores have also finished with a record above .500 in the SEC just one time since 1982 and have lost their last 21 games in conference – a conference that just keeps growing and adding great football programs.

Those are the kind of numbers that had many fans cracking up at Clark Lea’s prediction.

I think he meant county ? Are their HS in Nashville that could beat Vandy?

Obviously the Vanderbilt applied physics dept has mastered the space time continuum. Because that has a better chance of happening then Vanderbilt winning the SEC.

In the same way a dinosaur once said "We know in time we will be extinct and humans will roam the earth." You just have to shift to geologic time.

I'm all for the power of positive thinking, but COME ON....delusion is not a good look for anyone.
They don't even try to be. Look there's nothing wrong with focusing on academics.
Dirty secret: In engineering, they're not as good as we are in the REAL world.

Earth, 2047. Pandemic has ravaged the population. The ensuing wars leave the earth aflame. The living envy the dead. By some unseen hand of fate, a Russian targeting computer glitch has spared Nashville from nuclear annihilation. Vanderbilt football reigns supreme. Anchor down.