Bemused, Confused CFB Fans React To Report That A Bevy Of ACC Schools Are Bolting To The SEC 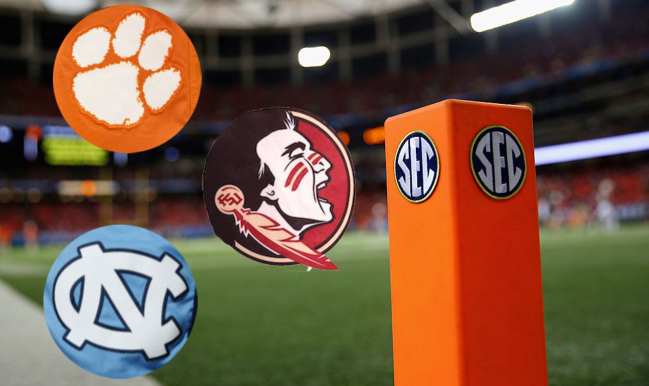 Following the seismic collegiate football landscape shift that saw USC and UCLA — based in Southern California — join the Midwest/Northeast-centric Big 10, reports now indicate that a few more CFB powerhouses could be on the move to perceived greener pastures.

SOURCE: North Carolina, Florida State, Clemson, and Virginia are all negotiating to join the SEC. ESPN is trying to void their TV deal with the ACC.

According to reporter Braden Keith — who, on one hand, is verified on Twitter, but on another, according to our in-house SEC expert and BroBible Blogging Brethren Grayson Weir, “he’s a swimming reporter with zero ties to CFB or the SEC and nobody else is picking it up” — the University of North Carolina, Florida State University, Clemson University, and the University of Virginia are eyeing a move to the SEC. No disrespect Braden, of course.

The report from Keith also notes that ESPN, which airs both ACC and SEC games and launched the SEC Network back in 2014, is trying to void its current TV deal with the ACC.

One thing is for certain: with the rise of NILs and the ongoing conference realignments, college football is going to become drastically different than it was in the past.