Vanderbilt’s Jerry Stackhouse Implies Fans Are Critical Of Him Because They’re Racist Trump Supporters, Not Because Of His Embarrassing Record 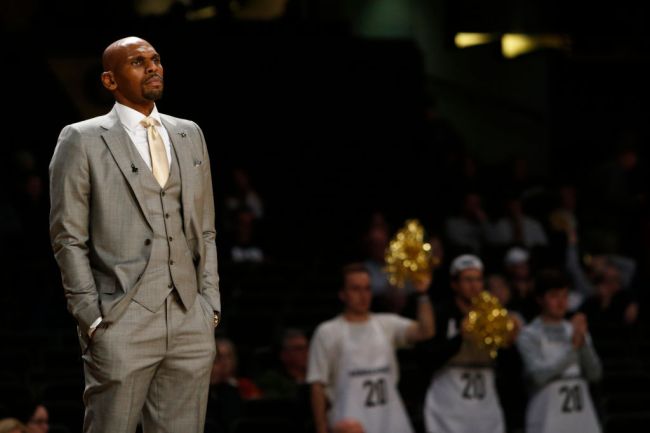 Vanderbilt’s hiring of Jerry Stackhouse as its head basketball coach back in April of 2019 was an exciting one at the time. The 46-year-old was an excellent player himself as a two-time All-American at North Carolina and a two-time All-Star in the NBA. He was also the NBA D-League Coach of the Year back in 2017, so he checked all the boxes you wanted for a coach that could flip the script at Vandy.

That hasn’t gone to plan, however. It’s been tough sledding for Stackhouse in Nashville as the Commodores are 16-31 overall and 4-23 in the SEC since his arrival. Stackhouse signed a six-year deal with Vanderbilt and a year and a half is too small of a sample to completely write off a coach, but things are certainly trending in the wrong direction.

The frustration level for Stackhouse has clearly hit an all-time high. Stackhouse spoke with Joe Rexrode of The Athletic and sounded off on long-time college hoops insider Jeff Goodman and even called out fans who are upset with the state of Vanderbilt’s program at the moment.

We all have people blocked on social media to avoid seeing things we don’t want to see. You can’t necessarily blame him for trying to dodge the heat, but then again, it’s interesting that he decided to call out Goodman.

Stackhouse wasn’t done there. He then took a dig at the Vanderbilt fanbase.

Stackhouse attempted to send a message to fans that are being critical of him while awkwardly explaining why he’s qualified to be a head coach.

“How am I not qualified when I played basketball at the highest level and played under some Hall of Fame coaches?” Stackhouse asked. “I don’t have the acumen to know what I’m looking at? What’s the angst? And it becomes the things we see right in front of us, man.

Stackhouse then took things a step further and brought politics into the conversation – a bold strategy in just about every setting, especially as a head coach – implying that if there were 75 million people willing to vote for Donald Trump, then there’s plenty of people out there dumb enough to question his coaching ability. He also suggested that those same people criticizing him weren’t big fans of him bringing in a diverse staff.

“All I can say is, 75 million people voted for Trump. That’s all I can say. You ain’t fooling me. I know what it’s about, a lot of you hate everything we did when we came here about the staff, the diversity of the staff, it was this or that,” Stackhouse said. “And I like to think I know a little something about building teams and what organizations should look like. I’ve worked and played for some of the best organizations.”

At the end of the day, wins and losses are all that matter and Stackhouse is one loss away from having double the amount of losses as he does wins since taking over Vanderbilt. You can’t have an abysmal record and have your team sit in the bottom-third of every major statistic in the SEC and not expect criticism. That is why fans are frustrated with Stackhouse. All of that criticism will disappear if the Commodores start winning basketball games.