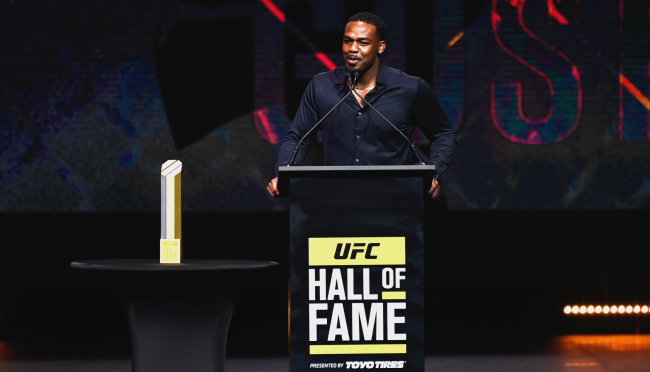 Jones’ arrest came just one day after his being inducted into the UFC Hall of Fame for his title fight against Alexander Gustafsson at UFC 165 in Toronto.

TMZ Sports reported that police said Jones became “irate and smashed his head onto the front hood of the LVMPD patrol vehicle” as he was being detained.

Jones’ fiancee Jessie Moses, the alleged victim of the battery, had blood “around her lips, chin and all over her sweatshirt,” according to police, and “seemed scared to even talk about” Jones.

“She’s not, um, she’s not admitting to any domestic violence, any physical violence, but I mean, she’s bleeding from the nose and mouth,” said security officer. “She’s down with us while the male is up at the room and he’s actually a professional MMA fighter, Jonathan Jones, and she is, like, refusing to go back to the room. We’re trying to assist her to help her grab her stuff, and she just will not go back.”

The security officer then tells police dispatch, “It’s a little weird, because she’s trying to get assistance, but she’s refusing to go back up to the room.”

When asked by the dispatcher if he had gotten medical help for Moses, the security officer replied, “Like, first aid, but she’s not requesting EMS and stuff.”

Later, in the police report, LVMPD detective T. Byrd wrote, “She stated she was in her bed of the hotel room when Jonathan returned after being out drinking with his friends. She said he was aggressive but not violent with her. She would not go into detail about the aggressive behavior but said she did not feel safe in the room with him. She grabbed her three daughters and left the room.

“Prior to getting her daughters, Jonathan grabbed her by the back of her hair and pulled her back toward the room. She said she didn’t feel like he was keeping her from leaving but said he didn’t want her to leave. She then got away from him, grabbed the kids and left the room.

“She took us to the bedroom where she said the altercation took place. There was blood on the bed sheets, as well as shoes strewn about. There were two fresh tissues on the floor. … As Detectives were leaving, Jessie asked ‘so how long do I have until he is out?’ She still seemed very scared as to the release of Jonathan from jail.”

Jones has a history of alarming incidents involving law enforcement as well as the UFC and the World Anti-Doping Agency.

In May of 2012, Jones was arrested for driving under the influence after crashing his car into a pole.

In January of 2015, prior to UFC 182, Jones tested positive for benzoylecgonine, the primary metabolite of cocaine.

In April of 2015, he was charged with a felony for injuring a person and purposely leaving the scene of an accident and was was stripped of his UFC Light Heavyweight Championship.

In July of 2016, Jones tested positive for two banned substances prior to UFC 200. He was stripped of his UFC Light Heavyweight Championship for a second time.

In August of 2017, prior to UFC 214, Jones tested positive for Turinabol, an anabolic steroid, and was stripped of the UFC Light Heavyweight title for a third time.

In July of 2019, Jones was charged with battery after allegedly slapping, choking, kissing and touching a cocktail waitress at a strip club.

In March of 2020, he was arrested on charges of aggravated DWI, negligent use of a firearm, possession of an open container, and driving with no proof of insurance.

He is currently free after posting $8,000 bail at the Clark County Detention Center and is due back in court on Oct. 26.