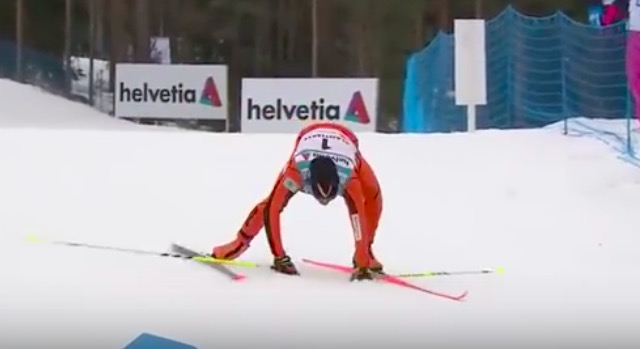 Solano, a 22-year-old from Venezuela, has been dubbed the “world’s worst skier” after his cringeworthy performance at the Nordic world ski championships in Lahti, Finland. In his opening event, Solano finished the first 3.5 kilometers in 39 minutes 37 seconds, which was roughly the same amount of time it took the other competitors to complete the entire 10-kilometer course, according to the New York Times. After the first 3.5 kilos, he called it quits.

Solano was at an extreme disadvantage against some of the world’s top cross country skiers, seeing as until arriving at the competition this week, Solano had never even SEEN snow, never mind competed on it. The 22-year-old cook had trained for five hours a day on weekends for the competition on on wheels instead of skis in the hot Venezuelan sun.

In his second event, the 1.6-kilometer cross-country sprint, Solano just aimed at finishing. He did, but finished 156th out of 156.

“We have a success culture that sports is only great if you succeed,” Valavuori said. “I want to get rid of that. You get some wins, you get some losses. But there are so many other things in sports. It’s all about the story.”

His long-term goal is to compete in the 2022 Winter Olympics.