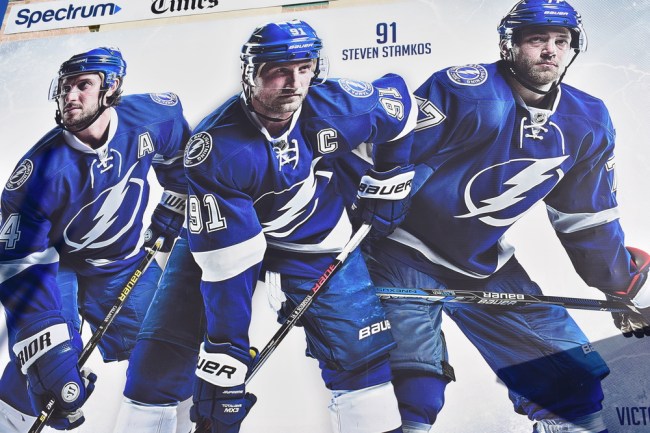 Number 77 for the Tampa Bay Lightning, Victor Hedman, is paid handsomely ($7.87M/year) for his vital role in helping the Bolts sit atop the Eastern Conference with the 2nd most points in the NHL, 2pts behind Nashville (the only team in the West to clinch a spot in the playoffs so far).

Hockey players are among the most superstitious athletes on the planet. For proof of this, you don’t need to look any further than how they don’t shave during the Stanley Cup Playoffs. But each player also displays individual superstitious quirks and Victor Hedman’s pregame ritual certainly qualifies in that category.

He’s been doing it for years but Deadspin threw up an article about Victor Hedman’s pregame ritual this morning and I thought I’d share it with you bros. Before every Tampa Bay Lightning game, Victor Hedman plays a game of mumblety-peg (‘the knife game’) with Tampa’s assistant equipment manager Rob Kennedy, using his stick to stab between each of Rob’s fingers in order to hone in his focus. Perusing YouTube, I found a bunch of clips showing Victor Hedman getting in the zone before the game:

I guess I should mention I’m a pretty big Tampa Bay Lightning fan so if this article sounded like I’m geeking out on the Bolts too hard then that’s the reason why. If you’re a Lightning fan/hockey fan and want to follow along with me on Twitter throughout the Stanley Cup Playoffs starting on April 11 you can find me on Twitter at @casspa.