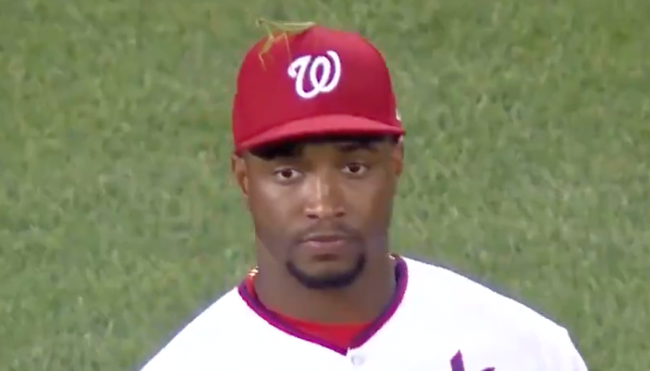 One of my favorite moments in baseball history occurred during the ALDS matchup between the Team Formerly Known As The Cleveland Indians and the New York Yankees in 2007. In the eighth inning of the second game, things went absolutely off the rails after a massive swarm of tiny insects known as “midges” descended upon the field and made life extremely difficult for Joba Chamberlin, who threw a wild pitch, hit a batter, and narrowly missed drilling a second one during the wild frame.

During Monday night’s contest between the Nationals and the Phillies, we were treated to a fresh serving of bug-related shenanigans after a praying mantis somehow managed to post up on the cap of Victor Robles while he was chilling in the dugout in the bottom of the eighth.

Whatever you do, don't tell Victor Robles that he's playing CF with a praying mantis on his head.@Victor__Robles // #NATITUDE pic.twitter.com/o3P0yE68cC

When Robles took the field at the top of the ninth, the praying mantis came along for the ride, and the outfielder was kind enough to make sure he knew how many outs there were by gesturing to his hat after the first one was recorded.

From what I can garner, the Elias Sports Bureau doesn’t keep any stats concerning players who’ve done their job with a praying mantis perched atop their head, but I’m going to go out on a limb here and assume Robles is the first guy (at least in the modern era) to pull off this feat. While the insects are normally considered a sign of good luck, that was not the case in this instance, as the Phillies recorded five runs over the course of the final frame on their way to a 7-5 victory.

I looked forward to Pixar’s upcoming buddy comedy about a struggling baseball player who finally makes it to the big leagues with the help of an incredibly knowledgeable praying mantis.