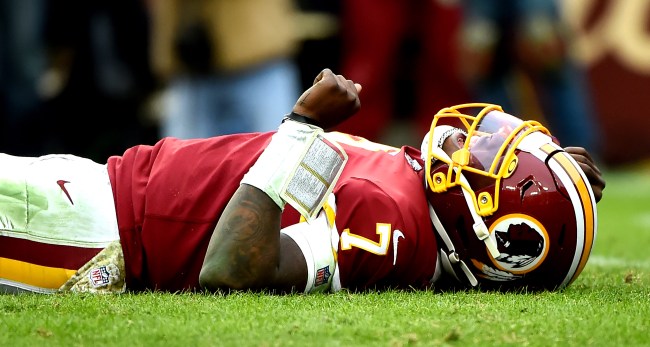 The Washington Redskins’ 2019 number one pick Dwayne Haskins made his second start at quarterback in the NFL on Sunday. He didn’t do terrible, going 19-for-35 for 214 yards with two TDs and one pick.

Unfortunately for him and Redskins fans everywhere, it wasn’t enough and Washington fell to the mighty 2-7 New York Jets 34 to 17 to drop to 1-9 on the season.

On the plus side, Haskins was able to finally break the Redskins team record slump of not scoring a touchdown in 16 straight quarters with his touchdown pass to the returning Derrius Guice in the fourth quarter.

On the negative side, video that has emerged of Haskins pleading with his offensive linemen during the game, asking them “what do I have to do to help you?” is embarassing on so many levels.

"What do I have to do to help you?"
-Dwayne Haskins (@dh_simba7) pleading to the #Redskins O-line #HTTR pic.twitter.com/5UAouDHXYq

It’s obvious from the video that the Redskins’ offensive linemen are not at all interested in getting a pep talk from their rookie quarterback making just his second start in a game where they are getting crushed by one of the worst teams in the NFL. Some of them even appear to be on the verge of laughing at him for his enthusiasm. What an embarassment, for everyone involved.

In fact, things have gotten so bad in D.C. Redskins fans were chanting “Sell the team!” at Washington’s owner Dan Snyder during the game.

My col: The prestige & status of Redskins in D.C. area reached their absolute bottom — the lowest point in the existence of the franchise here since 1937 — on Sun at FedEx. What once seemed impossible is now undeniable: the Skins have lost Washington. https://t.co/SEoMirRuBH

Perhaps the NFL should just start relegating teams like D.C. like the EPL does with their worst squads. Then maybe they’d have less sh*tshows like the Redskins, Bengals, and Dolphins.