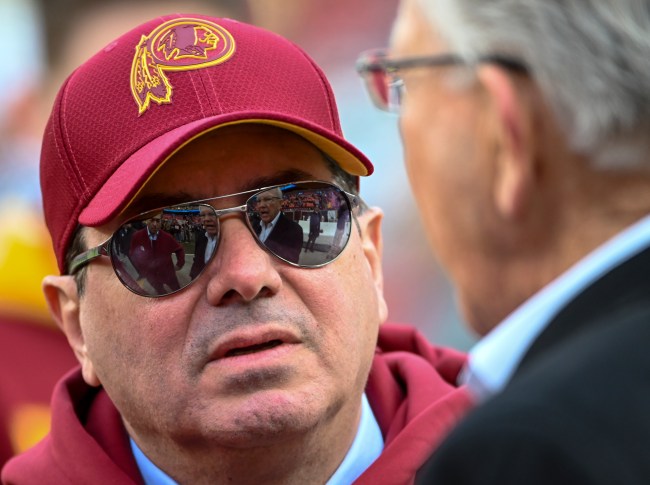 As the Redskins continue to spin their wheels in unintentionally self-parody, fans of one of the NFL’s biggest markets are sharpening their pitchforks and aiming them squaring into the doughy body of perpetually incompetent team owner, Daniel Snyder.

To make matters worse, Snyder isn’t just a no good, very bad executive, he’s also reportedly a very shitty person as well. Ya know, the kind of guy who makes his head coach come into the office at 5 am just to hand him a pink slip.

Andrew Brandt, EVP of Vayner Sports and former ESPN Business and Legal Analyst, recently told a story that sums up Snyder to a T.

“A friend of mine has children who plays with the children of Daniel Snyder, the owner of the Redskins. My buddy picks up his girls, and says, ‘Hey Dan, thanks for having them over, they really enjoyed playing with your girls.’ My buddy tells me, Daniel Snyder says to my friend, a 50-year-old man, ‘It’s Mr. Snyder.’ And I’m thinking, who does that? Who does that?”

“So, that’s just a story to give some on ownership in Washington.”

How far up your won fucking ass do you have to be to tell a grown man, who just offered you gratitude, to refer to you like a child would. It would have been less disrespectful if Snyder cupped one of his farts and wafted it into this dude’s face. At least farts are funny.

If it’s any consolation to Brandt’s friend, he was far from the only one Mr. Snyder treated like an unworthy peasant.

Three-time Pro Bowl linebacker LaVar Arrington, who spent six seasons with the Skins and was named one of the 80 Greatest Redskins, took it farther.

“The root of the issue is ownership… You had to address him as Mr. Snyder, even as an adult, and if you weren’t of a certain level or stature you were told not to look at the owner.”

"The root of the issue is ownership… You had to address him as Mr. Snyder, even as an adult, and if you weren’t of a certain level or stature you were told not to look at the owner." pic.twitter.com/wdhcXKnvsK

Let’s keep in mind that LaVar Arrington is 6’3”, and 260 lbs. in his playing days. He could have squashed Mr. Snyder’s head with the pressure he rolls his boogers. I just don’t think he’d be able to get his arms around it.