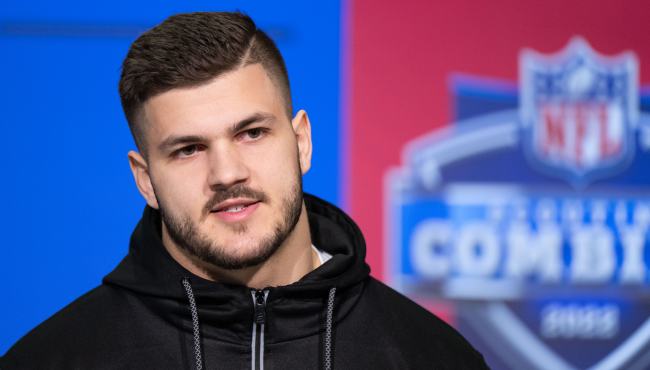 Being drafted by an NFL team is the fulfillment of a lifelong goal by the young men taken each year in the NFL Draft. It is an achievement that very few athletes will ever reach.

That achievement was fulfilled by dozens of players this past weekend, but one in particular is standing out thanks to a video posted by his girlfriend showing the celebration that ensued when he was selected.

His girlfriend, Robyn Haines, knowing just how incredible it was for the Lindenhurst, New York native and lifelong Jets fan to be taken by his favorite team (Lindenhurst is located just 50 miles away from MetLife Stadium), created a video most worthy of the occasion.

Not only does it give a behind the scenes look at the moment of selection by the Jets, the video is also set to the hit Billy Joel song “Piano Man.”

In doing so, Haines created what Matt O’Leary of OddsChecker called “the most Long Island TikTok of all time.” A TikTok video that has now been watched hundreds of thousands of times.

Another TikTok video she posted from the big day has been viewed over 2.5 million times.

It doesn’t get much better than that. Just look at his dad after his son was picked by the team whose games he would take Jeremy to when he was a kid.

Jeremy Ruckert grew up rooting for the Jets. This photo of his dad is everything. Congratulations @Jeremy_Ruckert1 @BeerShot21! pic.twitter.com/ghwABQKjeh

“It’s a dream come true,” Ruckert said after the pick, reported the New York Post. “I’ve dreamed of this since I was a little kid. I grew up a Jets fan. My whole family grew up Jets fans. Going to practices when they used to practice at Hofstra and going to games as a kid. The story’s still being written and I can’t wait to get to work but in this moment right now, I’m super excited and my family is super excited.”