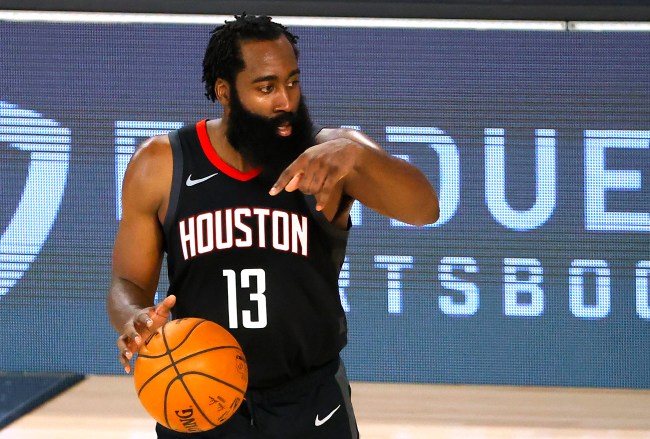 The NBA preseason is set to start this week but James Harden, who reportedly requested a trade this offseason, is still MIA from Rockets camp.

On Sunday, the disgruntled Harden missed the team’s first practice after being spotted in a strip club in Vegas. According to ESPN, Harden told the team he would join them for an individual workout on Sunday but ended up no-showing.

Source: James Harden did not return to Houston for his anticipated individual workout Sunday evening but told Rockets management he will report soon.

Apparently, Harden was seen by people on social media partying it up in Vegas after falling to report to practice on Sunday.

Harden reportedly missed both a team team practice and an individual workout on Sunday, though the Rockets expect him soon.

As usual, more video below.

my first thought was: “is this from Saturday night just uploaded later?”

According to NBA guidelines, Harden was supposed to have self-quarantined for a week before joining his team at training camp.

Players were required to report to home markets by Nov. 28 or Nov. 30 to begin daily coronavirus testing and then to "self-quarantine at home" apart from testing at team facilities, individual workouts and "essential activities" such as grocery shopping/taking children to school

Harden is also clearly violating the NBA’s ban on clubs/bars that was implemented earlier this week.

It’s unclear how the Rockets/NBA are going to handle the Harden situation but it’s going to get uglier the longer it goes on.