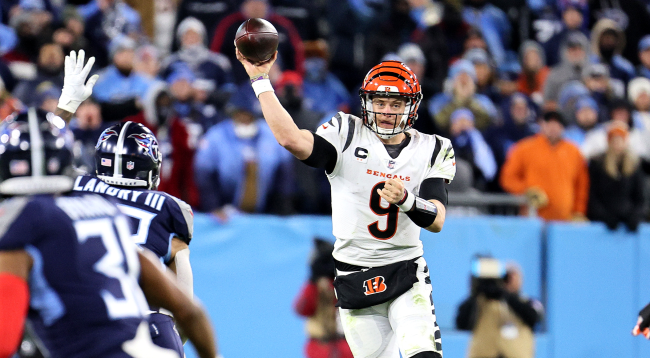 Cincinnati Bengals quarterback Joe Burrow, assuming his offensive line doesn’t get him killed, is going to set a lot of records before his time in the NFL is over.

In fact, this weekend he will be already setting one when he becomes the first quarterback drafted number one overall to start a conference championship in two seasons or less.

Then again, he’s always been good at football.

According to WLWT News, Burrow’s Athens High School classmates voted him “most athletic” and “most likely to be famous” after passing for 11,416 yards with 157 touchdowns, plus 2,067 yards rushing with 27 more TDs on the ground.

He was also a first-team all-state point guard in his senior year.

Well well… look what I found! Not only was Joe Burrow voted most athletic in high school, but @JoeyB was also named most likely to become famous! @wlwt #BengalsNation pic.twitter.com/4uWHRQTWua

Actually, you can go back even further apparently to know Joe Burrow was going to be something special.

One of Burrow’s youth football coaches recently shared some video of Joe with Karin Johnson of WLWT News.

In it, we see Burrow balling out on the gridiron during his third and fourth grade years.

Before Joe Burrow was Bengal or played for LSU or Athens HS, he as making plays and running the ball like he owned the field. I met a former coach today who saved the tapes from @JoeyB’s 3rd and 4th grade years—when he started playing QB! @wlwt pic.twitter.com/gd1I0tZMyR

That, right there, is how you get your local school board to unanimously approve renaming your high school’s football stadium in your honor.

He is special no doubting that

This was amazing. Every person ever involved in a youth football program, cried watching it. #ruletheplayoffs #BurrOH

Watch as Burrow, on defense in one clip, drops the hammer on an opposing running back.

"Teams that tried like crazy to beat Joe, now are so proud that he's from our area"

We went back to Joe Burrow's hometown to get a look at where he started before his playoff debut ❤️ pic.twitter.com/vFKhpS4fiw

Jimmy Burrow, Joe’s dad, was an assistant coach with Nebraska when they went to the 2002 Rose Bowl. Joe, at age five, went to the game and shortly thereafter began playing football himself.

Joe credits his preparation for his success.

“In his mind, everywhere he’s been, high school, LSU, now the Bengals, his preparation has always been the same and he’s had great coaches to prepare him and he says the calmness comes from him putting in the work and being prepared for what he’s going to see,” Jimmy told WLWT News.

We’ll see is he’s ready for the Chiefs on Sunday. Or better yet, if they are ready for him.