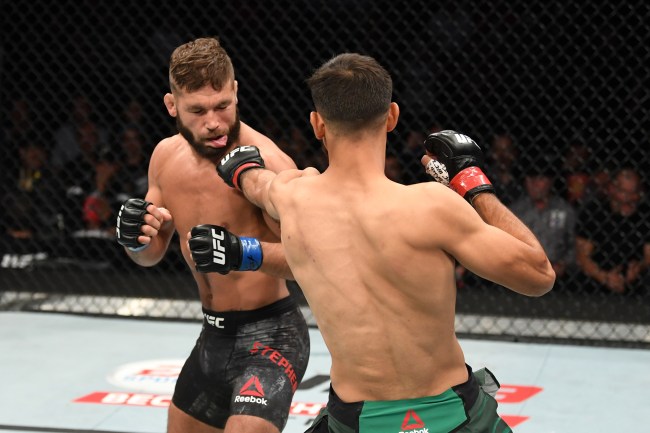 This weekend at UFC Mexico Stephens was forced to withdraw 15 seconds into his fight with Rodriguez after he was accidentally poked in the eye.

“He got me good.” To the disdain of a Mexican crowd now throwing garbage into the Octagon, Jeremy Stephens and Yair “El Pantera” Rodriguez is ruled a No Contest due to stoppage (eye poke) #UFCMexico pic.twitter.com/c6lNEN3auF

This strike to the eye caused the #UFCMexico main event to be ruled a No Contest pic.twitter.com/EXIKa2PyeE

After the fight, angry fans threw beer and litter at Stephens as he exited the cage.

Can’t recall ever seeing behavior like this from fans at a UFC event. Maybe I’m forgetting one, but not even in the early days. Gross. pic.twitter.com/12QqIl8hod

Stephens and Rodriguez would later get into a heated confrontation while in a hotel lobby where they yelled gay slurs at each other.

When Stephens told Rodriguez to call UFC matchmaker Sean Shelby to “run it back” with a rematch, Rodriguez said, “Run it back – I won yesterday.”

With hotel security starting to intervene, Stephens yelled back to Rodriguez, “You poked me in the eye, f**got,” to which Rodriguez responded by calling Stephens the same gay slur.

Jeremy detailed what happened at the Hotel while on the Ariel Helwani show.

Jeremy Stephens and Yair Rodriguez got into an altercation at the hotel in Mexico City the day after their fight.

“He comes up all cordial, giving a thumbs up,” “He’s like ‘Hey everything ok?’ He comes up, shakes my hand, trying to be a gentleman… Then he starts talking shit to me. I’m like ‘I’m not from karate school. bro, I’m from the street. I’m here to compete, I’m here to fight, I’m here to kill you.’

“Right away my mentality was ‘back the f**k up,’ so I shoved him,” Stephens continued. “His coaches, his Dad, his parents and everybody was like ‘whoa, whoa whoa.’ I know his sister has footage. I’m waiting for them to release that footage but I guarantee they’re not going to release it, cause he looked like a coward there, coming up. I thought he was trying to be a gentleman, unfortunately that wasn’t it. He wants to talk and say anything? I don’t know Yair, he doesn’t know me, but I’m not like that. I’m not gonna let you come up and talk s**t especially after you eye-poked me.”

There’s a good chance Stephens and Rodriguez face each other in the cage in the near future.

There’s definitely a desire to run Rodriguez v Stephens back in the near future, though nothing has been booked yet, sources say. They’ve even talked about adding it to the Boston card which is less than a month away (10/18) and recently lost its co-main.