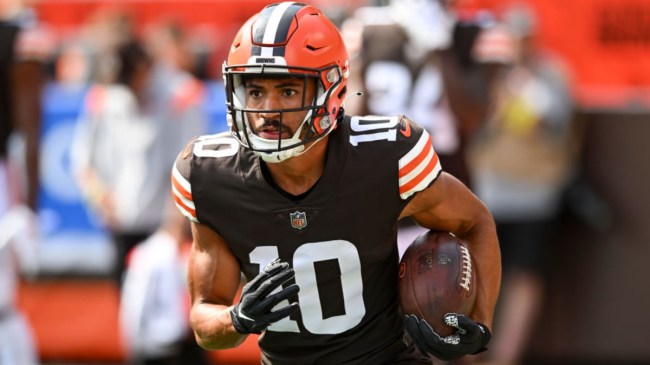 Over the course of a career in sports, you’re bound to have a couple of moments that you hope nobody outside of your team ever sees and probably that you hope your teammates missed as well.

Anthony Schwartz had one of these moments at practice for the Cleveland Browns yesterday and he was not quite so lucky.

During a drill at practice, Schwartz caught a pass and turned upfield to take on some tackling dummies. On his way into the sea of dummies, Schwartz ran into some trouble. He hit the first dummy and was stopped in his tracks.

Unfortunately for Schwartz, the video made its way to the internet.

Schwartz finishes the play, but it looks like a ref might have ruled that his forward progress had been stopped if this had happened in a game.

It’s been a rough season for Anthony Schwartz. After struggling to make much of an impact in his rookie season for a Browns offense that didn’t have many options at receiver, his second season has seen him barely take the field.

Getting stood up by a tackling dummy probably isn’t going to help him convince the Browns’ coaching staff to give him more playing time.

Luckily for Schwartz, the Patriots won’t have any tackling dummies lining up across from him in Sunday’s game for whatever snaps the Browns do give him.