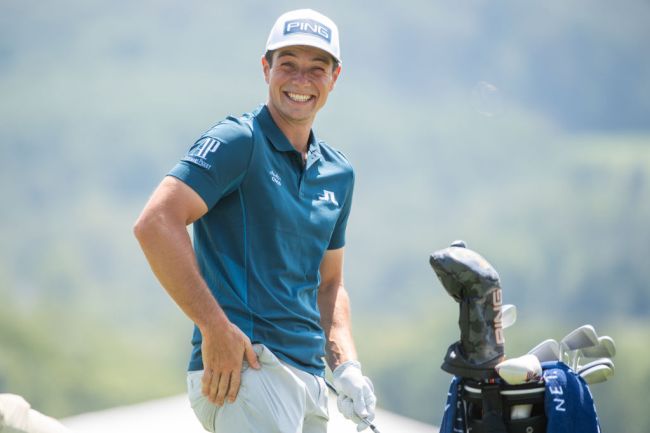 Viktor Hovland continues to be one of the coolest guys in all of golf. He’s young, Norwegian, constantly smiling, and absolutely mashes the golf ball.

He’s listed at just 5-foot-10, 165 lbs, so you wouldn’t expect him to be one of the best drivers of the golf ball on the PGA Tour, but that’s exactly what he was a season ago ranking sixth on Tour in strokes gained: off-the-tee.

Hovland has always seemed to be in solid shape, but over the last couple of months, and even at the Ryder Cup, some people started to notice that it looked like he had added a bit of muscle. Announcers during the first round of this week’s Shriners Children’s Open noticed this as well.

“You think we’re seeing a bit more chest muscle here on Viktor?” one of the announcers asked, according to Golf Digest. “He’s been hitting the weights a little bit?”

After Hovland posted his opening round 67, the broadcast team decided to ask Hovland if he had been hitting the gym more lately, and his answer did not disappoint.

“The JL, I call it they have the auto-jack shirt, they just fit around the arms so they look huge, even though they’re really small,” Hovland said. “But, no, I have been working out a little bit, but, yeah [laughing].”

Ah, yes, the old auto-jack shirt. If that isn’t a ringing endorsement for Hovland’s clothing sponsor J.Lindeberg then I don’t know what is.

Just another reason to root for this guy. He would’ve given this exact same, lighthearted answer no matter what he shot on Thursday, but the 67 certainly had him in a good mood.