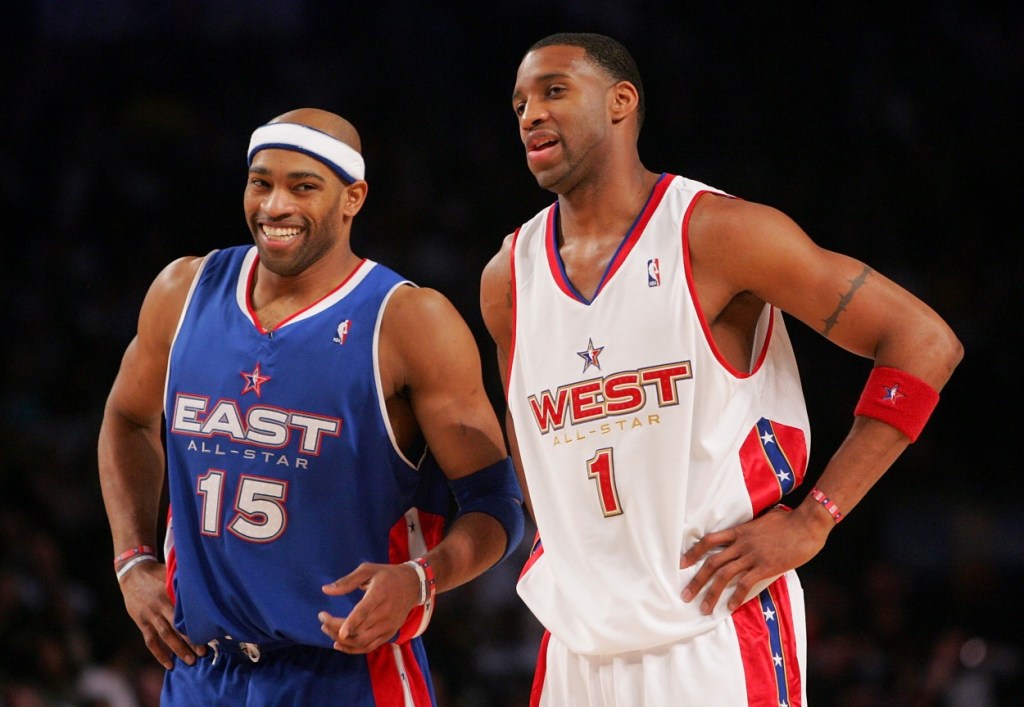 On the latest episode of the Knuckleheads podcast with Quentin Richardson and Darius Miles, they have the legendary Vince Carter on as a guest. Vince is an NBA legend and hearing him just talk about the game would be enough but he busts out some incredible stories.

You can stream the full podcast episode below. I’ve also included a video where Vince Carter discusses THE legendary NBA Slam Dunk Contest. But I’ve transcribed the story here where Vince and Tracy McGrady found out there were cousins at a random family reunion. And that revelation ultimately led to Tracy and Vince playing together in Toronto. It’s a wild story.

Vince Carter: “Crazy story. The year he came out of high school, he was in Mt. Zion, North Carolina and I was in Chapel Hill. He comes out and comes over to Chapel Hill to play pickup. To get ready to play some games.

We did not know we were cousins through all of this, I’m telling you. Playing pickup that week, he comes into the locker room. Everybody says ‘what’s up’ it’s a kid going pro, whatever. I knew him so I was like ‘yo, you can use my locker’ because nobody would let him use their locker. Whatever, I say “go ahead and put your stuff in my locker playing pickup, whatever.”

He goes on Thursday, “it’s probably gonna be on Friday because I’m about to a family reunion” [implying he’ll use the locker then]. And I’m like ‘alright cool, see you next week.”

I didn’t go to the family reunion. I stayed home because I was in summer school and he happened to be sitting at the table with her and she goes “oh you’re going pro? Congratulations. You went to school in North Carolina?” she’s like “oh my grandson go to school in North Carolina” and he’s like “oh for real, who’s your grandson?” and she’s like “Vince Carter.” He was like “what???” and that’s how we found out.”

They know they’re cousins but what comes next is wild!

Vince Carter: “So he’s calling me ‘cuz cuz’ we were talking about all things like he’d get drafted through first year up and down whatever. So we get to the end of the year, now he’s calling me all through my college year like “dawg, come play with us” and I’m like “that ain’t gonna never happen.”

Bro… you have no pull. Like, c’mon, what are you talking about? Sure enough, they came down to Chapel Hill to watch me play pickup and the guy said ‘hey, if you’re available we’re going to draft you so you might as well come take a visit.” I was like ‘alright, I ain’t never been to Toronto, Canada. Which way?”

Today marks our 100th Episode! We got a HOFer in waiting with us today. Mr. Half-Man Half-Amazing, Air Canada, Vinsanity aka @mrvincecarter15! @playerstribune #knuckleheadspodcast @hennessy ✊🏾😎✊🏾 pic.twitter.com/v3ZDLPDBgG

I go visit and had the worst visit ever. They lost my bags. My room got canceled. Because I was at the airport so long they canceled my room because they thought I wasn’t going to be there. So I leave the sky dome and I end up going down to room service two hours late. So now it’s like 2 in the morning and I gotta workout in the morning. I get to the workout, the manager forgot to bring my uniform. So he had to go back to get it.

I was like “this ain’t meant to be, sorry cuz.” They said I had a good workout but it didn’t feel like it. You know you go to one of them workouts you want to make everything, it just didn’t feel like it. Next thing I know, I got drafted by Golden State. He calling me like “cuz!” and I’m still on stage and they’re talking about ‘there’s about to be a trade” and I’m like “dang, someone’s getting traded already? That’s crazy! Is this what the NBA is like?”

Vince On THE LEGENDARY Dunk Contest

The rest was history. Vince Carter was an 8-time NBA All-Star, NBA Rookie of the Year, he changed the Slam Dunk Contest and in the video below he discusses that.

Stream the full episode of ‘Knuckleheads’ with Tracy McGrady right here on the Player’s Tribune. Vince Carter also discusses 1995 being the best high school class of all time and what it was like becoming a North Carolina Tarheel.