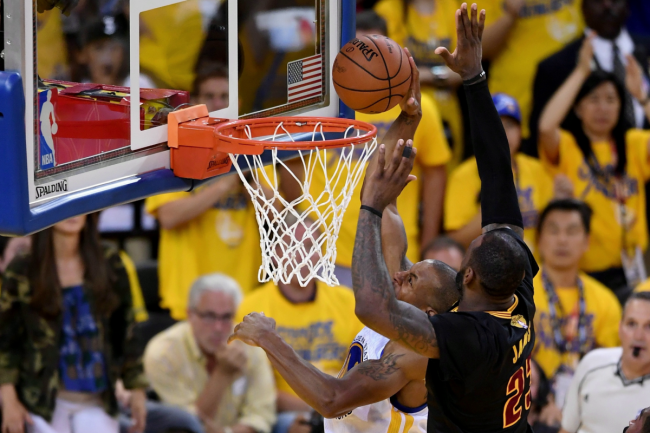 Bronny James is making headlines this summer with his play on the basketball circuit.

The son of legendary NBA star LeBron James, he certainly garners the attention. Bronny is a top 50 player in the 2023 recruiting class according to most recruiting services, and he’s being courted by programs like USC, UCLA, Oregon, Michigan, and Ohio State. In fact, many believe James to be leaning towards a commitment to the Ducks, though his father would disagree.

Bronny’s abilities are evident, and a few recent clips on Twitter have those college programs salivating at the opportunity to land the budding star.

He went viral on social media with a vicious tomahawk jam that reminded many of LeBron. Now, Bronny’s doing it on the defensive end with a huge chase down block that instantly had NBA fans flashing back to the 2016 Finals.

Bronny was seen chasing down an opponent and swatting his shot off the backboard. A move reminiscent to a famous play from his father a handful of years ago.

The chase down block had many remembering LeBron’s rundown swat of Andre Iguodala in Game 7 of the 2016 NBA Finals.

We’ll let you be the judge.

Throwback to when LeBron block Iguodala in Game 7 of the 2016 NBA Finals 🔥🐐👑 pic.twitter.com/azteJdZY0U

LeBron may have had a bit more on the line with his series clinching swat, but the viral clip of Bronny shows the guard’s athleticism on the court. If he continues to post highlight reels like this, James is sure to have college programs calling.