LeBron James Fires Back At Reports Saying Oregon Is The Favorite To Land His Son, Bronny 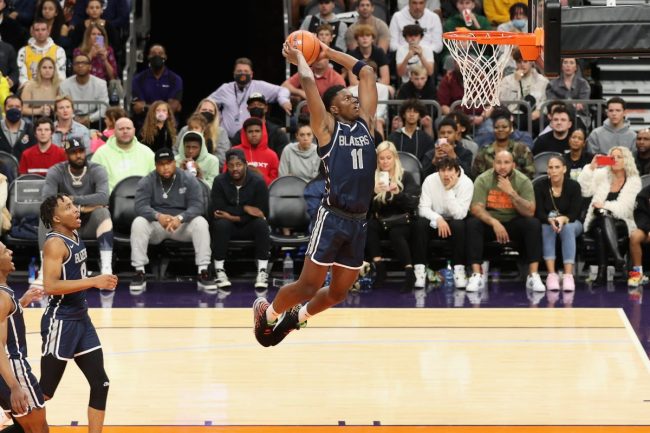 Bronny James is one of the most high-profile prospects in the upcoming college basketball class. A 2023 recruit, he’s listed by most recruiting services as being a top 50 player in the nation.

As you can imagine, with his dad being LeBron James, his recruitment has been followed by fans throughout the country.

There was recently an update given on the status of Bronny’s college decision process, naming Michigan, Ohio State, Oregon, UCLA, and USC as schools that had been recruiting him the hardest.

One program, in particular, was being pointed to as the favorite to land the shooting guard. That program was Oregon.

On3 recruiting expert Jamie Shaw went as far as to log a prediction for James to land in Eugene. Apparently, Bronny’s dad has taken exception to that prediction.

LeBron James responded to the reports that Bronny was leaning towards choosing to play for Oregon, saying that the recruiting process is just beginning. He says that any updates will come from Bronny, himself, not some recruiting service.

He hasn’t taken 1 visit yet and has only had a few calls with coaches and universities. When Bronny makes his choice you’ll hear it from him. #JamesGang👑 https://t.co/BBciKxl7m8

He hasn’t taken 1 visit yet and has only had a few calls with coaches and universities. When Bronny makes his choice, you’ll hear it from him.

LeBron says that Bronny is far from making a decision as he’s only spoken to a few coaches and universities. He’s yet to take any campus visits.

Bronny’s recruitment seems like it still has a way to go, and judging by LeBron’s response, they’ll keep things tight-lipped and close to the vest.