WHAT MONTH IS IT?! Virginia’s Worst Shooter Downs Syracuse With A Clutch Game-Winner At The Buzzer 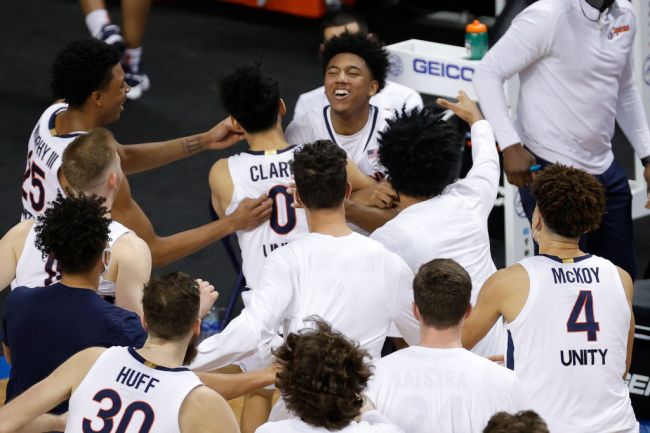 Reece Beekman was 0-5 from the floor during the first 39 minutes and 54 seconds of Virginia’s quarterfinal matchup in the ACC Tournament, but he stepped up when it mattered most. With the game tied at 69, the true freshman got a wide open look from beyond the arc with 1.2 seconds remaining and drained the buzzer beater to win the game and advance the Cavaliers to the semifinals.

Syracuse played the conference’s top seed tight until the end, but left Beekman alone by himself in the least opportune situation. With the defensive lapse, the Orange will now have a nervous wait until Sunday to see if they will get into the NCAA Tournament. Head coach Jim Boeheim’s son Buddy led the team with 31 points and kept his team in the game from start to finish.

Syracuse looked the part of an NCAA Tournament team today and has several key wins. But the Orange are going to have a very long couple of days. Right at the cut line.

The victors, on the other hand, will advance to the semifinals against either No. 12-seed Miami or No. 5-seed Georgia Tech without having to worry about getting in. Virginia would have gone dancing, even with the loss. Senior guard Sam Hauser, who played a crucial role in the school’s 2019 national championship, dropped a team-high 21 points while forward Jay Huff had a double-double with 13 and 10.

The Hoos are technically the reigning national champions after the 2020 NCAA Basketball Tournament was cancelled due to COVID-19 and went 13-4 in the regular season. Their only losses came early in the year to San Francisco, to No. 1 Gonzaga, on the road against their No. 22-ranked in-state rivals, and to second-seeded Florida State. Virginia will look to own the regular and postseason ACC title, as well as improve its seeding for March Madness.