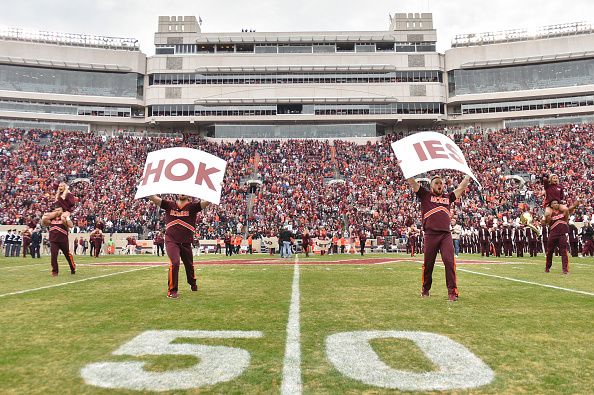 On Tuesday, East Carolina decided that its football team wouldn’t travel to Virginia Tech for Saturday’s game against the Hokies regarding safety concerns due to Hurricane Florence,.

Via The News Observer

Citing significant imminent safety concerns, ECU has decided it will not travel to Blacksburg for Saturday’s football game against Virginia Tech due to the forecast track of Hurricane Florence that includes the high probability of a catastrophic impact on the region and perilous travel conditions before, during and after the storm,” the release from East Carolina said.

Virginia Tech was not happy with ECU’s decision because as the home team they wanted to wait a few days to make a final determination on whether the game should be played or not.

“We will do what’s best for Virginia Tech moving forward as it relates to ECU and to the game,” . “We certainly understand the need for safety, of course, we just felt that tomorrow, making the decision then, would’ve been more responsible and accurate. We informed ECU of this multiple times.”

At 6 p.m. on Tuesday, Virginia Tech’s official football Twitter account posted a tweet reminding everyone that team had played North Carolina during Hurricane Matthew in 2016 and won the game.

Oh, you thought you could just delete that? Nah. pic.twitter.com/OYDiJhHH8u

Of course this caused plenty of outrage amongst fans.

Don’t forget that NCSU was heavily criticized for playing that game. You will never please everyone when deciding whether to cancel a game.

First class operation you have there @WhitBabcock Incredibly disappointing for a program all ECU fans and alumni have held in the highest regard for so long.

ECU is evacuating the entire campus. The Hurricane may have shifted but will still affect ALL of N.C. The football team will be safer in FL. For VT to expect them to travel there during a major storm with no guarantee of being able to get back or to the next game is asanine.

They are so proud of themselves for winning a game played in the rain. Doing big things up there in Blacksburg.

The school’s associate athletic director Pete Morris eventually came out and apologized for the tweet.

100% my fault entirely for not deleting it before it went live.

No intent of being insensitive to those in harm’s way. Should have purged it before today – my fault & my apologies https://t.co/otSLTFX2lt