LOOK: Vita Vea Struggling To Get His Jersey Off For A Postgame Swap Is Absolutely Hysterical 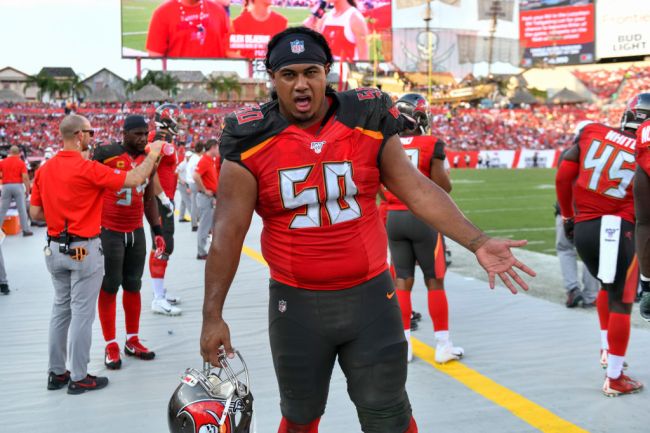 Tampa Bay Buccaneers defensive tackle Vita Vea stands 6-foot-4, 346 pounds. For him to fit into a jersey is quite the task.

Especially as a defensive lineman, Vea wants his jersey to be as skin-tight as possible. That way, there isn’t any extra polyester for an offensive lineman to grab onto.

And then, once the game gets going, the sweat starts flowing and the jersey gets even tighter. Thus, taking it off is an absolutely chaotic process.

Vea demonstrated just how difficult it is for such a monstrous human being to get his shoulder pads and jersey off after Thursday’s game against the Eagles. As Tampa running back Leonard Fournette was getting interviewed by Fox, Vea was in the background trying to swap jerseys with Philadelphia tackle Jordan Mailata.

Mailata, who is 6-foot-8, 346 pounds didn’t have a particularly easy time, but Vea could not have struggled more. It’s hilarious.

After a solid eight seconds with his pads and jersey over his head, Vea gets some some help from one of the Bucs staffers. The camera cuts away before we get to see exactly how long it took to get the jersey off, but it was at least a solid 20 seconds.

Vea finished the night with one tackle, two assists, a sack and the win. He also finished the evening, after a painstaking struggle, with Mailata’s jersey.

It was a tremendous effort that could not have been more entertaining to watch.