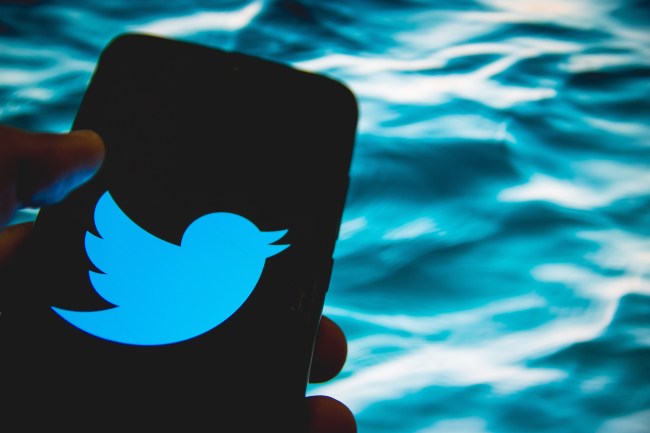 On Monday night, NBA Twitter was engulfed in a bizarre mystery featuring a Lakers podcast host that went missing which led to some wild catfishing allegations. The story is complex and has several twists and turns but I’ll try my best to give a quick breakdown of the entire situation.

On Sunday, Lakers fan Josh Toussaint announced that his podcast host Vivian Flores, who is currently battling leukemia, was missing in the LA area and urged people to help locate her by sharing his Twitter post.

No way are you serious!?! Everyone please retweet this. Anyone in the area. Super dope soul please help. https://t.co/kpKlQ7B5W0 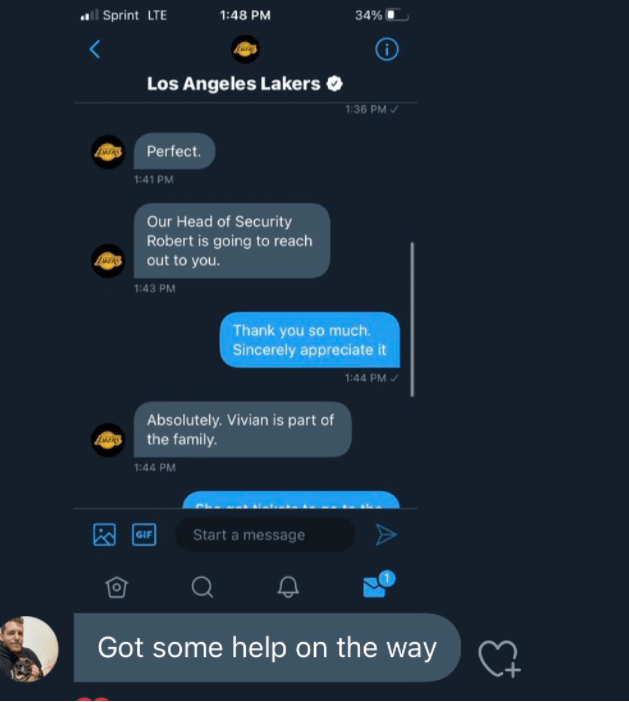 Vivian has been found and ItsKingsBruh revelation.

On Monday night, Josh announced that Vivian was safe and had been found.

During a Twitter Spaces session that included NBA superstar Kevin Durant, Twitter user ItsKingsBruh revealed that he had an online romantic relationship with Vivian but had recently broken things off with her after he suspected that she was a catfish and that’s when she went “missing”.

KingsBruh got catfished by a man for over 2 months.. when he tried to cut her off she pretended to go missing and people started feeling digger and there is no way the acc isn’t run by a man pic.twitter.com/lEHQYJYphC

Twitter users then began combing through Vivian’s Twitter page and found some strange photos that appeared to be badly photoshopped.

i’m crying no way she was getting away with this pic.twitter.com/hxl1lW6x9c

Photoshopping yourself hooping overseas should be punishable by law. LMFAO

After people began discovering the photoshops they started accusing Josh of being behind the Vivian account. Vivian would eventually resurface on Twitter to deny the catfishing allegations made against her but still refused to get on a live video stream to prove that she really was the person she was claiming to be. 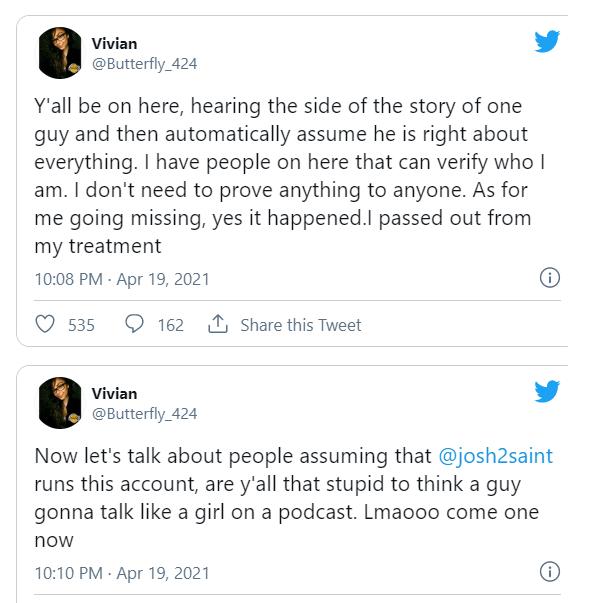 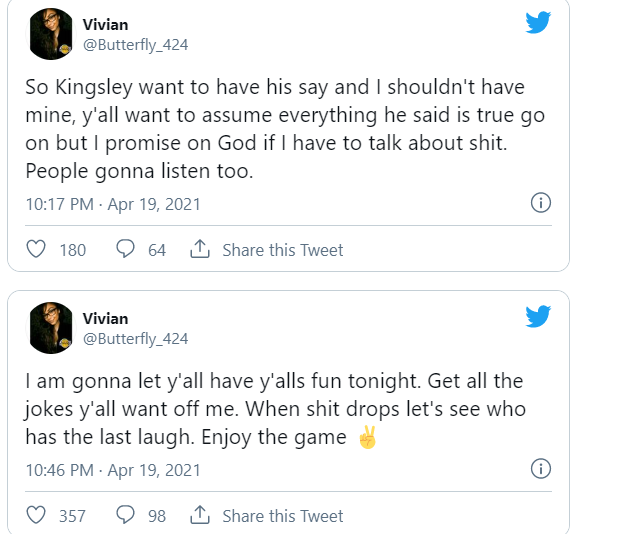 After staying quiet for several hours Josh spoke out and admitted that he believed Vivian had deceived him when she refused to respond to his messages on Monday night.

Still haven’t gotten a goddamn explanation. Thought I trusted someone and learned my lesson. Tried to help a friend I thought was in peril. I was duped like yall and feel bad I was a pawn. Such garbage. Logging off for awhile. Stay safe out there. You never know ✌️

Josh hopped on a video with his friend Waleed to claim he has proof that Vivian isn’t a real person and that she had duped him.

Josh went on to share DMs with the Vivian account on the day she went missing when he believed he was talking to her concerned family members.

When I got that DM from Vivian’s sister, I immediately texted her to confirm it wasn’t a troll.

The crazy part is that this number isn’t real. Idk how she has access to it pic.twitter.com/YjtrNq87pr

Josh also explained why he never did video calls with Vivian during their podcast sessions.

– Her excuse for not doing videocalls was because of her “self esteem”
– We’ve talked on the phone several times
– I do my pods on the Anchor app in the “Record with Friends” function, so I would send her the links. This one day she kept saying she was delayed bc crying nephew https://t.co/RCP60mmzUU pic.twitter.com/8VLjd9s4At

The most bizarre allegations against Vivian come from NYC DJ Chumzilla.

According to Chumzilla, Vivian tried to catfish him 11 years ago using a different name.

It’s a big catfish account I went along with 11 years ago to see how far it would go and to expose them. They originally impersonated model Roberta Little under the name Joanne Peters. I contacted her agencies a few times but heard nothing back.

At the time Twitter didn’t have any solid rules about this type of thing so the only thing that happened was the account went on the impersonate other people. I was able to track two of the emails to a man outside of the US but I can’t who or where.

Update:Vivian apparently used to go by the name of “Kelly” and was a member of Raiders Twitter back in 2018.

New development: Vivian used to go by the name of Kelly (@lil_butterfly88) and was knee deep in Raiders Twitter. This shit is insane. pic.twitter.com/9LU5uQrw7y

Some people still believe Josh is behind the Vivian account because the two accounts used the same punctuation/emojis in their most recent Twitter posts. 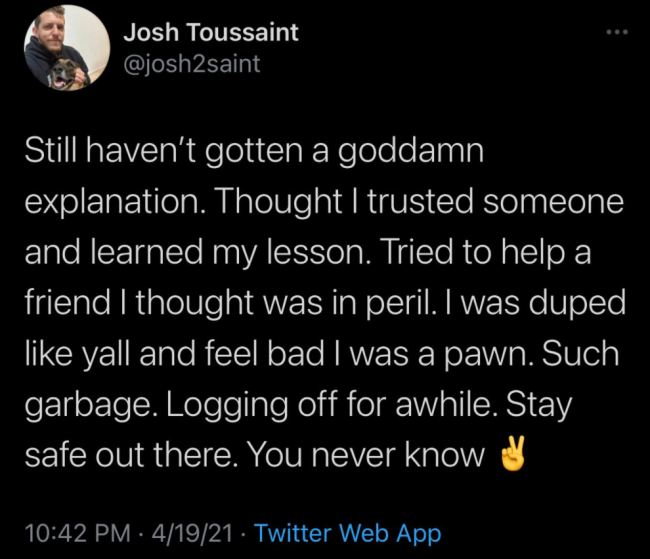 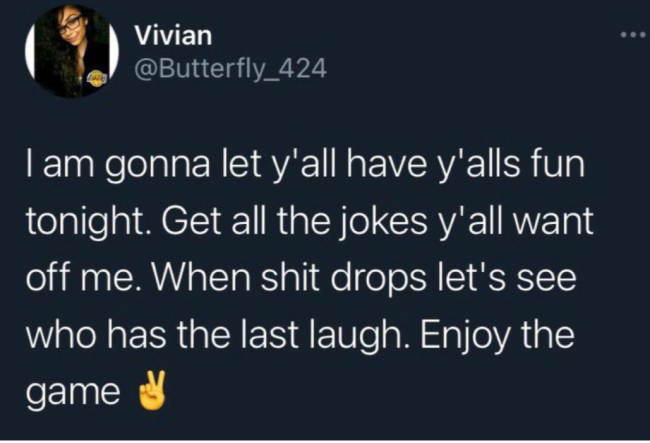 NFL Network’s Patrick Claybon believes Josh may have made up Vivian just to have someone to podcast with.

Reader, when I suggest someone recorded themselves in a modulated female voice to laugh at their own joke but poorly clipped the audio…and i tell you I’m tweeting this with tears streaming down my face. Know I’ve truly lived pic.twitter.com/TUHZCga0dM

Audio forensics not my strong suit but I well sometimes 1.5 hour 2 person pods with only one person can get jumbled.

Update #2 An audio engineer broke down the audio of Vivian’s podcast appearances and here are the results.

Out of curiosity, I pitched down “Vivian’s” voice from the Lakers podcast to see what it sounded like without any potential effects that could be used to make it sound higher pitch. pic.twitter.com/sHeCidWF7K

Sounds like an Australian guy to me. Not that this is evidence of anything, I was just trying to figure out if audio effects were used.

For the record as a former audio engineer, I’d say that this exercise has made me think it’s possible that pitch shifting was used, but not at all guaranteed. It could just be that voice. I am pretty sure that pod is two different people though unless he’s really good at voices.

Do y’all realize how advanced reface technology is these days? Look up the name (Sharon Alexie..)

So simple to take a models picture & morph it with your own..

All done with a simple reverse image search..

Go take a look for yourself & you decide.. pic.twitter.com/5WZTj49EKY

The stolen face used by the catfish is model Sharon Alexie pic.twitter.com/UKgmGQJFa6

I am in tears at my desk cuz of VIVIEN 🤣 pic.twitter.com/DAHsYSAMbu

Twitter detectives think Josh’s friend Waleed could be behind the Vivian account after he misspelled Vivian’s name as “Vivien” in a DM.

Shout out to my best friend, @Wwaleeed5 for defending me. This was us texting on my birthday. pic.twitter.com/rhUmTXINgy

ok is this waleed dude playing josh too or are they both in on this? WTF pic.twitter.com/A1ZK6KgLtw

Waleed spells Vivian with an E in this DM he sent Josh. They’re either both in on it or Josh is about to learn his buddy Waleed has been playing all sorts of games. Case closed, let’s go home boys. pic.twitter.com/DnJ78ThQZE

So far that’s where we are with the Vivian catfish situation. I’ll try to make sure to continue following the story and update it with new information.