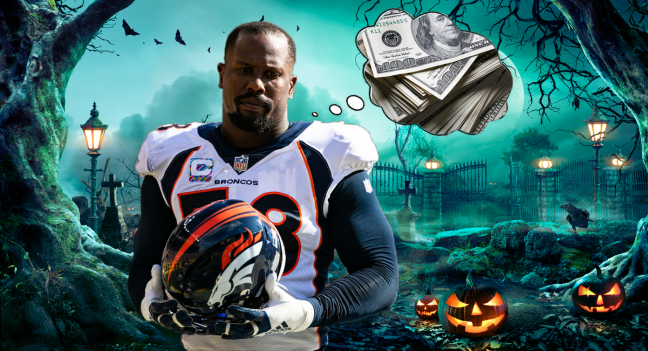 Up until Monday, new Rams linebacker Von Miller had spent his entire 11-year career with the Broncos. And then they shipped him off to Los Angeles for a second and a third round pick.

While there are a lot of details that we will never know about why and how the trade happened, we now know that it may have had something to do with a Halloween party.

Miller, who is known for his annual Halloween parties, threw this year’s banger to the tune of at least $100,000. The party even included a performance from Migos rapper Quavo.

However, Miller reportedly did not want to pick up the tab for his own party. According to Pro Football Network, Miller asked his teammates to chip in after the fact. He even demanded that rookies contribute more than $1,000 each for a party that they neither threw nor helped plan.

As the internet immediately turned around and tried to discredit PFN’s report, Denver’s 104.3 The Fan decided to ask tight end Noah Fant about it.

Fant said that he had not heard the report prior and wished that the news had stayed in the locker room. He then went on to essentially confirm the report about the rift over the party.

Noah Fant just essentially confirmed this report with us in the air. Said Von wanted to cancel the party because of losing streak. Other guys didn’t. Money became an issue between guys. Fant added he was sad that what should have stayed in house got out to the media. Wow… https://t.co/dIOIATs9n9

Here is his on-air response:

As Von Miller exits #BroncosCountry, did he leave behind a locker room rift over his Halloween party? Here's Noah Fant's take on the situation pic.twitter.com/emd5SbOec4

Pro Football Network’s report also said that the team’s front office and head coach received word of the on-goings and were then more willing and eager to trade Miller.

Again, we may never find out the full story. However, this incident appears to be the icing on the cake for the Broncos to trade Miller, who is set to become a free agent at the end of this season.