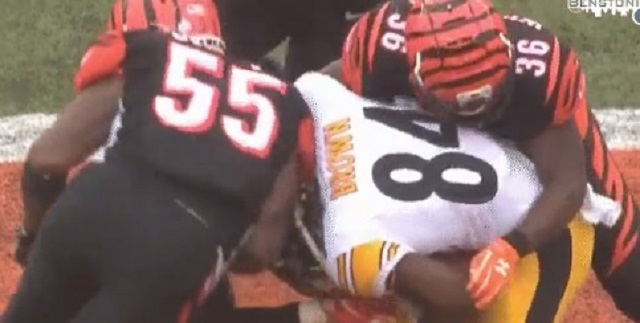 Vontaze Burfict is playing in his second game this season after coming back from a 4 game suspension for PEDs but it appears that he may be forced to miss more time after the league reviews the tape of this week’s game.

During today’s Steelers-Bengals game, Burfict delivered a late shoulder hit to Antonio Brown’s head while the Steelers wide receiver was being held down by twi other Bengals defenders.

#Bengals LB Vontaze Burfict puts his shoulder to the head of #Steelers WR Antonio Brown. Where have I seen this before? pic.twitter.com/Nl8RVagR4j

He's 6 quarters back from suspension and one of the dirtiest players in the NFL couldn't help himself. Vontaze Burfict, ladies and germspic.twitter.com/GeDy4uBGgI

Burfict was not penalized for the play and Steelers fans were irate.

Still don’t know how you miss this call lol. That’s was an obvious hit intended to hurt Brown. Expect none the less from Burfict though https://t.co/JqYFNKMKtr

#Bengals LB Vontaze Burfict puts his shoulder to the head of Antonio Brown. NFL will take a strong look at this one.
pic.twitter.com/UgFa2R20TQ

If NFLcares so much about safety, suspend Burfict for that hit on Brown

#Bengals dirty LB Vontaze Burfict, who is just coming off a suspension, with a late hit to @AB84 Antonio Brown's helmet. pic.twitter.com/QSiCg79IQf

Hey @nfl if you really care about head injuries maybe it’s time to suspend Vontaze Burfict again because he doesn’t get it. Another foreman to AB’s head

Burfict is the dirtiest player in the whole NFL no doubt about it… https://t.co/hmooU0wtjr

#Bengals dirty LB Vontaze Burfict, who is just coming off a suspension, with a late hit to @AB84 Antonio Brown's helmet. pic.twitter.com/QSiCg79IQf

The NFL is going to have to eventually ban Burfict from playing football because dude is constantly getting suspended for dirty stuff like this.