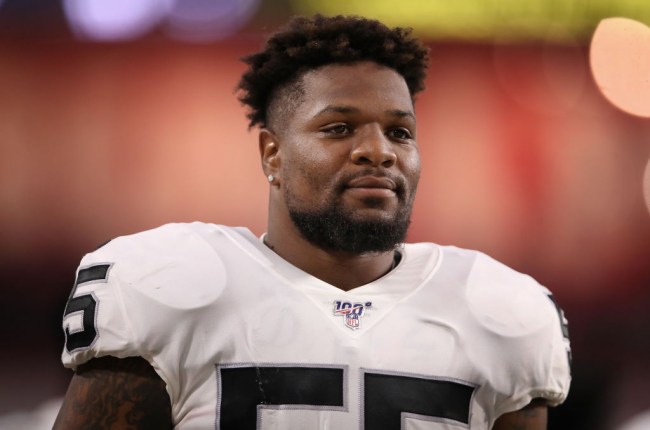 During the fourth game of the 2008 Eastern Conference Finals between the Cavaliers and the Celtics, Kevin Harlan treated us to one of the most memorable calls in the history of sports broadcasting when LeBron James viciously posterized Kevin Garnett “with no regard for human life!”

Of course, the commentator was being hyperbolic but there is one athlete who seems to enter every single game he plays intent on literally killing someone: Las Vegas Raiders linebacker Vontaze Burfict.

Burfict has a long and storied history of being an absolute piece of shit that stretches all the way back to his playing days in high school and repeatedly showed some incredibly questionable judgment when he was at Arizona State, which played a role in him going undrafted after he attempted to enter the NFL following his junior year (the failed drug test also didn’t do him any favors).

However, the Bengals ultimately decided to take a chance on him, and while he managed to make it through his rookie year without incident, he found himself in trouble with the league for the first time in 2013 when he was fined $31,000 for two impressive lapses in judgment in a game against the Packers.

It soon became clear that this wasn’t a one-time thing, and by the time his stint in Cincinnati came to a close in 2018, he’d found himself on the receiving end of multiple fines and three suspensions—two of which were in connection to dirty hits and another for failing a PED test.

Burfict got a chance to start anew when he signed a one-year contract with the Raiders last year and proceeded to prove he’s still the biggest asshat in the NFL when he was ejected for an egregiously illegal hit on Colts wide receiver Jack Doyle, which led to him being hit with a 12-game suspension (the longest one ever handed out by the league for an on-field incident).

The linebacker attempted to appeal the punishment but the NFL presumably laughed at him like the employees in the toy store in Jingle All the Way did at Arnold Schwarzenegger when he asked for a Turbo Man and upheld its ruling.

Now, it looks like Burfict will have a chance to redeem himself (again) if a team is willing to take a chance on him, as NFL.com reports the league reinstated him last month and that his agent says he’s used his time off to try to adjust to a playing style that doesn’t revolve around attempting to murder people.

From Vontaze Burfict’s agent, Peter Schaffer, who told me Burfict has been working out at his alma mater, Arizona State (where Burfict has an advocate in former #Bengals coach Marvin Lewis). pic.twitter.com/4wa3wCmajQ

I’ll believe it when I see it.