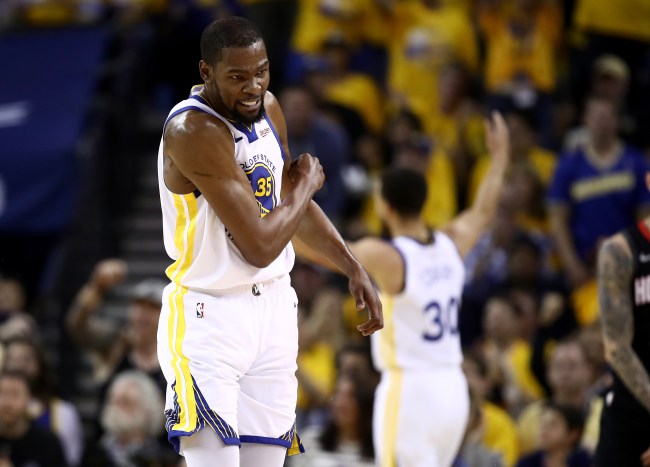 This afternoon the Golden State Warriors, who have a long rest period until the start of the NBA finals, announced that Kevin Durant is unlikely to play in the first few games of the NBA finals due to a calf strain but they remain “hopeful” that he’s able to return at some point in the series.

Kevin Durant (calf strain) is unlikely to return for start of the NBA Finals, but the Golden State Warriors are hopeful that he returns at some point during.

Warriors say it’s unlikely Kevin Durant will play at the start of the #NBAFinals and DeMarcus Cousins will play at some point. pic.twitter.com/pWugTbEnrq

Some Warriors appeared worried about the fact that KD will not return at all during the playoffs.

I would not be shocked if we have seen KD play his last game as a Dub.

At some point meaning next season? They should stop bullshiting fans and tell that his injury is not just strained calf.

While others don’t seem to be worried at all about missing KD considering how the Warriors have been playing without him.

Regardless, run the offence through this man pic.twitter.com/obXZzqfq3s

Ok so now instead of sweeping they’ll just win 4–1.