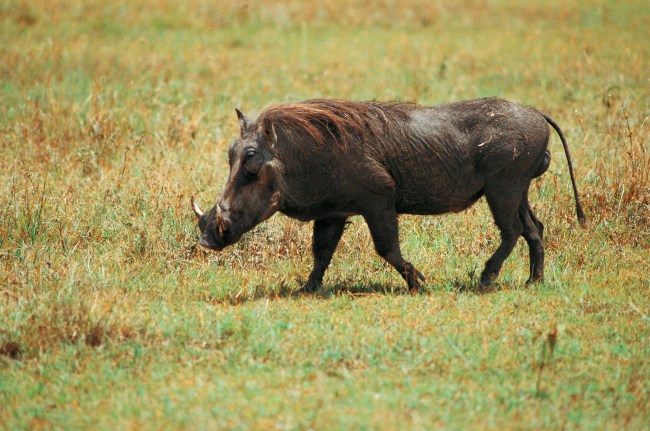 In Disney’s ‘The Lion King,’ Timon and Pumbaa seem like incredible approachable creatures. The wisecracking meerkat and gluttonous warthog go about each day living life to the fullest.

“Hakuna Matata,” they say. It means no worries!

Well, one innocent (not particularly intelligent) bystander recently found out that sometimes, there is cause to worry. Especially with warthogs.

A viral video made rounds across the internet early this week showing an encounter between a man and a warthog. It’s unclear as to where the video was filmed, but it appears to be at some sort of resort and has set the world wide web ablaze.

In the video, the man documents the encounter and provides a play-by-play.

The warthog begins off in the distance. It then turns toward the man gracefully climbs some steps and walks in his direction.

“I wonder if we can pet him,” the extremely unintelligent man asks. Obviously not.

Moments later, he finds out the answer first-hand. The warthog lets out a high-pitched squeal and takes him to the ground.

The man can be heard asking for help before the video abruptly cuts off. Hopefully he got some?

I have been screaming the whole day 😂😂😂😂😂😂 pic.twitter.com/SYF1y97kOA

The video, which is truly hilarious, teaches a great lesson: don’t try to pet a wild animal, even if you’ve seen it in a Disney movie. It has since gone viral on Twitter and everybody and their mothers have chimed in.

Pumba is trending because of some viral video with a warthog. But as a Disney fan, all I can think about is that the correct spelling is Pumbaa. pic.twitter.com/wpGkgANPeI

Him: I wonder if I could pet him
Pumbaa: pic.twitter.com/BrZBnJUN6s

People really forgot how Pumbaa (not Pumba) was clearing out the hyenas once they messed with his and Timon’s adopted son https://t.co/56rKyRu0eJ

After Disney laid off Pumbaa… pic.twitter.com/B6fPt1uWW2

The warthog said “does this man think im Pumbaa????” pic.twitter.com/y9gJ6QuSXl

Let this be a warning, kids. Don’t mess with Pumbaa or you’ll get the horns.