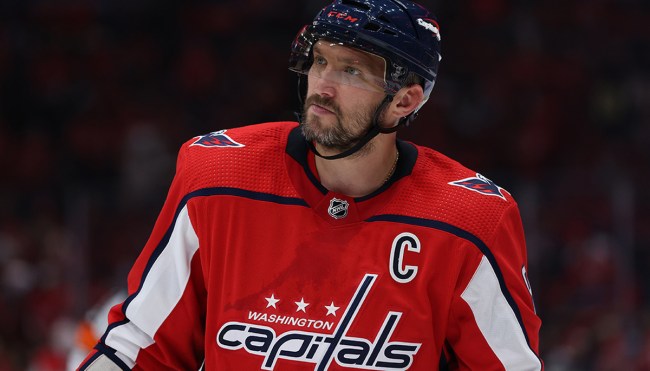 Ahead of Tuesday’s showdown between the Jets and the Canadiens in Winnipeg, a Ukrainian men’s choir was invited to perform a rendition of the country’s national anthem in a moment of solidarity following Russia’s invasion of its neighbor to the south.

The conflict is a particularly hot-button issue in the hockey world thanks to the number of NHL players who hail from Russia. Last year, Rangers star Artemi Panarin found himself at the center of a smear campaign after criticizing Vladimir Putin, which put him at odds with fellow countrymen like Semyon Varlamov and Alexander Ovechkin, who have previously expressed support for the autocrat.

Last week, Ovechkin skated around the issue a bit when he issued a statement condemning the violence while neglecting to distance himself from the person who sparked it. It’s safe to say the Washington Capitals public relations team hasn’t exactly had an enjoyable couple of weeks, and now, they’ve found themselves dealing with another headache courtesy of a picture that’s circulating online.

On Friday, a photo that was allegedly sourced from the handbook given to employees at Capital One Arena made the rounds thanks to a new addition that suggests the venue recently updated its guidelines to specifically ban any signs with a reference to Ukraine or Russia.

The @Capitals are officially forbidding #Ukraine flags from the arena.
Classy. pic.twitter.com/X5OxKonuMw

It appears the addendum was included to reinforce a preexisting ban on any messages deemed “political,” and contrary to what some people have erroneously stated, Ukrainian flags will still be permitted according to ESPN‘s Greg Wyshynski.

However, @Capitals will “allow Ukrainian flags at our events so long as they don’t obstruct views or hinder game experience.” pic.twitter.com/blWTfMpeVS

It’s also worth noting its unclear where the picture originated and that its authenticity has yet to be verified; given the amount of misinformation that’s circulated since the start of the conflict, the veracity of the claim should be taken with a  grain of salt (as of this writing, neither the Capitals nor their PR team has issued an official statement concerning the policy).

With that said, that hasn’t stopped plenty of hockey fans from operating under the assumption it’s real, and they have not been shy about ripping into the franchise and suggesting possible workarounds.

So the @Capitals created a Ukraine-Russia problem. @SlavaMalamud tweets the team has a "no Ukraine-Russia signs" policy and did not allow a Ukrainian flag into last night's game; the video below tweeted by a Polish radio reporter clearly shows a guy in Row 3 with a Russian flag. https://t.co/Felwi8UCjC pic.twitter.com/rjtCK6IJm8

@Capitals why are you not allowing support for Ukraine at your games? Winnipeg jets did a beautiful tribute at their arena. Dump your Russian players and and take back your humanity. The world is watching 🌻🍁🇺🇦🇨🇦

Everyone needs to pick up a Ukraine Hockey Jersey and head to a @Capitals game.

The Capitals will face off against the Kraken in Washington, D.C. on Saturday night, and I have a feeling there will be plenty of blue and yellow on display in the crowd.