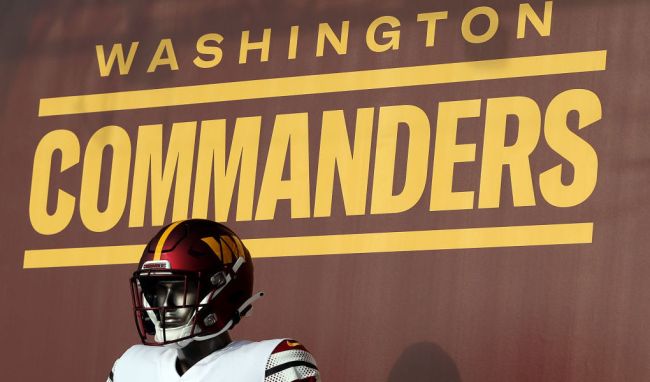 On Wednesday morning, the franchise formerly known as the Washington Football Team announced their new name: the Washington Commanders. While the name had been rumored for some time now, the Commanders finally made it official.

The question should be asked, however, if the organization thought the name through as much as they should have, as almost everyone on Twitter has been making the same joke about the name since it was announced: the Washington Commies.

Rebranding is always gonna be tough and I think “The Washington Commanders” is a good name..

Now of course.. They’re gonna be called The Commies.. they’re red.. in the Nation’s capital but nonetheless.. Commanders is a good name

focus on the hilarious aspect of NO ONE realizing this over 2 years pic.twitter.com/b1b5pCcYiC

I, for one, am embracing the Commies nickname. Down with the bourgeoisie.

I knew there would be logo leaks ahead of tomorrow's announcement. #Commies pic.twitter.com/Sh1A9OZqoU

We’re about to see 24 hours minimum of non-stop “Washington Commies” jokes and memes on here.

Hail to the Commies. pic.twitter.com/vJ9AG1wp2s

Their home stadium? The Commode https://t.co/CIC2hxTa5u

Trying to decide which hat I should wear for Commies, I mean Washington Commanders games next fall pic.twitter.com/yS7vJn0kEi

HAIL TO THE COMMIES!

COMMIES ON THE WARPATH!

FIGHT FOR ALL D.C.!!!! pic.twitter.com/kQSexue5hi

“As an organization, we are excited to rally and rise together as one under our new identity while paying homage to our local roots and what it means to represent the nation’s capital,” co-owner and co-CEO Dan Snyder said in an official statement. “As we kick-off our 90th season, it is important for our organization and fans to pay tribute to our past traditions, history, legacy and the greats that came before us. We continue to honor and represent the Burgundy and Gold while forging a pathway to a new era in Washington. Today may mark the first day for the Washington Commanders, but we are and always will be Washington.”

The organization’s name change has been in the works for almost two years now, as the team finally ditched the “Redskins” moniker and logo back in 2020. The change came after the George Floyd protests in the summer of 2020, which prompted 87 shareholders and investors — including league sponsors such as Nike, FedEx, and PepsiCo — to write a letter to the franchise urging them to change the name.

The Washington Commanders’ new name and uniforms will go into effect during the 2022 season.