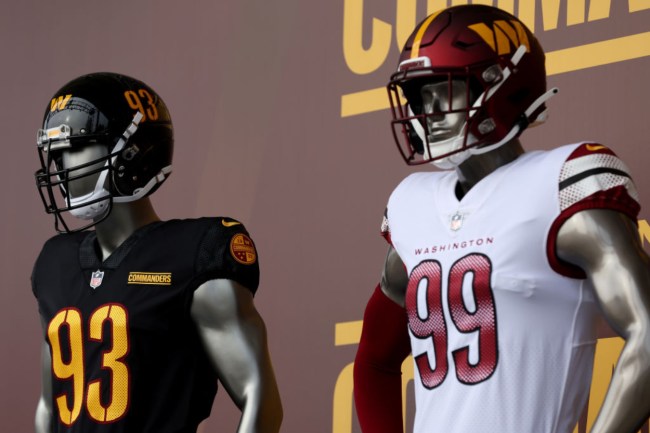 The worst kept secret was officially confirmed on Wednesday morning as the Washington Football Team revealed its new name moving forward will be the Washington Commanders.

The name was essentially confirmed on Tuesday night after a local news helicopter took a video from FedEx Field which showed the ‘Commanders’ name on a sign outside of the team store. The franchise made the announcement about the new name on Wednesday and also showed off the team’s new uniforms.

The Commanders will have three different uniforms next season which feature a black top, white top, and burgundy top. They’ll have two different helmets to choose from as well, a burgundy helmet with a gold ‘W’ on the side as well as a black lid with a small gold ‘W’ on the front of the helmet and the player’s number on the side.

The Commanders certainly could have done worse with their new uniforms and helmets. Let’s not forget the NFL is still home to the Houston Texans, Tennessee Titans, and Atlanta Falcons, those three franchises still sit close to the basement when it comes to their uniforms.

The one thing you can pick at when it comes to the new Washington look is the gold ‘W’ on the front of their black helmet, however, it is unique.

As per usual, NFL fans had quite the reaction to the Commanders’ new uniforms and shared their opinions on Twitter:

The Washington Commanders have a “new” logo. pic.twitter.com/EWfQnsxoCm

How do you have cool temporary unis and the permanent ones look like they were taken off the corpse of an AAF team https://t.co/gSC5YZzuDl

If I didn’t know any better, I’d think this is a JUCO that just made it on to last chance U https://t.co/sGRDK6lG1K

There’s really no creativity in these offices…. https://t.co/D7eUM9c4fH