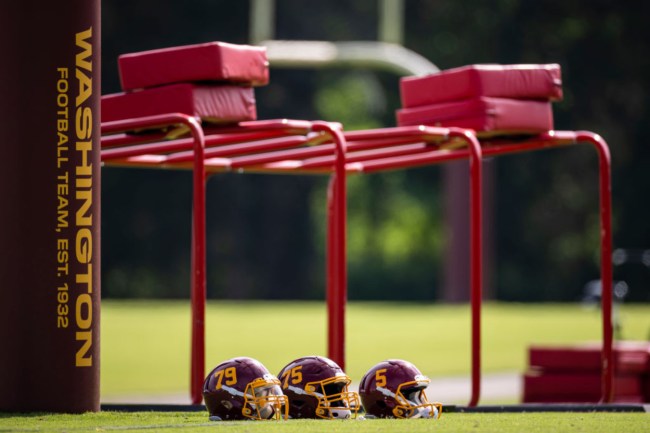 Not too long ago the Washington Football Team announced that it would be revealing its new name on 2/2/22. While the day is almost here, everyone has been trying to get the inside scoop on what the new name will be.

Brad Freitas of NBC Washington Chopper 4 appears to have taken the search to a whole new level. He jumped in the news channel’s helicopter to take a ride over FedEx Field the night before the big announcement and he seems to have found something.

In the video shared to Twitter, cameras zoom in on a sign inside the stadium that clearly reads ‘Commanders’.

According to NBC Washington, the video is specifically of the team’s in-stadium store. The lights were turned off shortly after the video made the rounds to make the merchandise more difficult to see.

Washington Commanders Has Been A Long Time Coming

If you’ve been paying attention to the two-and-a-half-year name search in Washington, the franchise going with Commanders as its nickname shouldn’t be surprising.

In January of 2021, a teaser photo of new Washington Football Team uniforms was shared.

The speculation was, that based on the stars on the sleeve, the uniform seemed military-esque. Most assumed that the team would go with Admirals, Armada, Brigade, Commanders, or Defenders as its new nickname.

The biggest hint came just a week ago when an internet sleuth found that the Commanders.com domain was transferred over to MarkMonitor, which is the same company the NFL uses for all of their domains.

Washington Commanders is an alright name and it fits the whole vibe of the team being located in D.C.