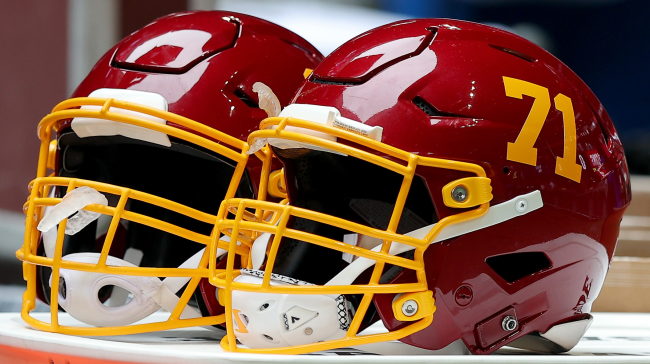 Way back in July of 2020, the Washington Football Team announced it would finally be retiring the nickname Redskins after getting pressure from stadium naming-rights sponsor FedEx complained about it to ownership.

30 months later, Washington is on the precipice of picking a new team name.

Washington is going to reveal its new team name and uniform on 2/2/22.

Over the past two-plus years, there has been no shortage of internet sleuths trying to find out what that name will be.

Did the alleged uniform leak provide a strong hint?

This past January, a tease of the new Washington Football Team uniforms was revealed.

We speculated that based on the stars on the sleeve, the uniform seems military-esque. That would perhaps allude to the Admirals, Armada, Brigade, Commanders or Defenders.

According to one internet sleuth, that speculation was justified.

Domain information may have actually revealed that the Washington Football Team’s new name is going to be the Commanders.

The https://t.co/yrU1fTNObC domain was transferred from Namecheap to MarkMonitor (same company NFL uses for all their domains) as of 7:34pm EST today.@WashingtonNFL | #WashingtonFootball | #WFT pic.twitter.com/ru53FDSqR4

The Comeback reports the Commanders.com domain is registered under MarkMonitor Inc., which is the company that registers the domain names of the majority of the other NFL team sites.

Previous domains like WashingtonAdmirals.com, which had linked to what appeared to be a Washington Football Team placeholder site, now redirect to the NFL’s Crucial Catch page. Commanders.com currently shows an error message.

So will Washington’s new team name end up being the Commanders when it is revealed on 2/2/22? I certainly appears that way.

Not that fans are thrilled about it, based on many of the reactions to this news.

Literally ripped off an AAF team name, that’s how awful Commanders is. If you were to create an expansion team in Madden, Commanders would be generic name #1

Horrible name if true but this is exactly what I expect from Snyder. 2 years to choose a name and they botched it.

@WashingtonNFL if true you guys not getting another penny from me!!

Wizards is one of the worst names in sports, I will say that.

Do you mean commandos they don’t wear underwear?

Problem with commanders is it doesn't roll off the tongue. It's 3 syllables and no way to shorten it. I am great with a name change but still usually say "skins" cause it's the fastest and flows easiest off the tongue.

I was hoping for the Washington Walruses