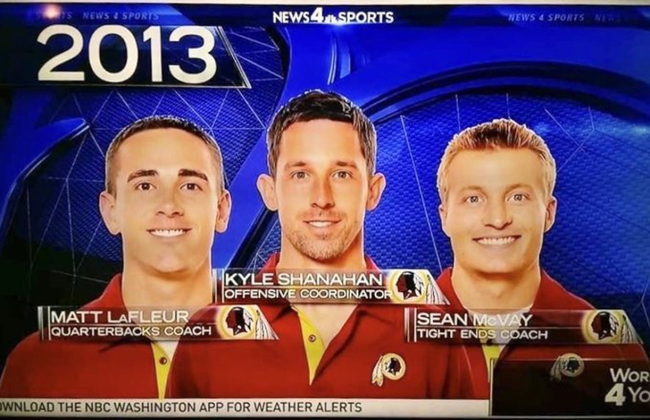 What do they all have in common?

All three were assistant coaches on the 2013 Washington Redskins.

In fact, out of the four teams still left in the NFC Playoffs, only Bruce Arians wasn’t on that 2013 Washington coaching staff.

Bonus: Raheem Morris, the Rams’ defensive coordinator, was also on that staff as the secondary coach.

Following that 2013 season, in which the Redskins fell to 3-13 after making the playoffs with a 10-6 record and a NFC East division title in 2012, Washington fired head coach Mike Shanahan.

they hired Jay Gruden as HC instead while all 3 left to coach elsewhere pic.twitter.com/pFGp1AJiyL

McVay and Shanahan have both also led their respective teams to Super Bowls – the Rams in 2018 and the Niners in 2019. LaFleur, so far, is two for two at making the NFC Championship Game.

Needless to say, this bit of trivia about the WFT has stunned many NFL fans, and annoyed many of the Washington faithful

All three are still coaching in the playoffs 😳 pic.twitter.com/tb21gefx7P

This is just painful.

We deserve to be laughed at. We let those geniuses leave Washington and do better things while WFT is still struggling to find a stable offense🙃

Me being a Washington fan... pic.twitter.com/Q0KZz1bNuD

This has always perplexed me. This is when you know an organization doesn't have an eye for talent. All three of them are now coaching playoff teams 🤦🏽‍♂️

And all 3 are younger than Tom Brady 😳