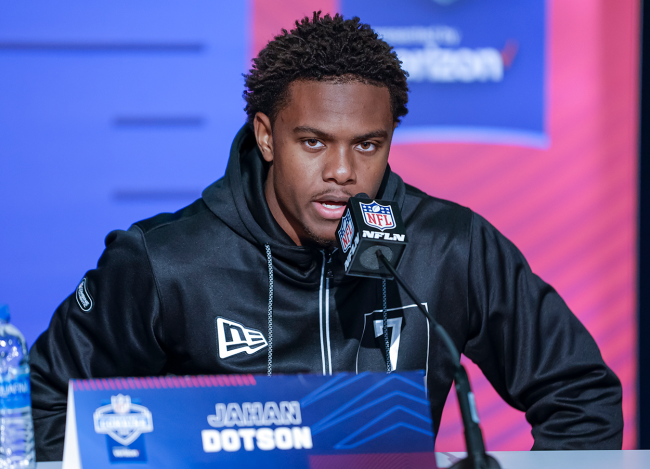 Well, not exactly. Dotson actually did not hear his name called at all because he straight-up was not watching.

Of the players that were in attendance at the Draft in Las Vegas, Dotson was not one of them. Despite not being there in person, one would assume that a player that who expects to be a Day 1 or Day 2 pick would have the coverage on his TV at home.

Dotson did not. He had no idea that he was picked No. 16 overall until Washington Commanders head coach Ron Rivera called his cellphone.

Upon answering, Dotson found out that he was about to be picked. In fact, Rivera’s call actually interrupted what his new wide receiver was doing instead of watching the draft.

Washington Commanders first-round pick Jahan Dotson, on getting the call from Ron Rivera: “honestly, I was watching the Suns-Pelicans game on my phone.”

It’s not like Dotson grew up as a huge Suns or Pelicans fan. He’s from New Jersey. He simply chose not to watch the draft.

“I had no idea where I was going to go (in the NFL Draft),” Dotson said. “We were kind of thinking later first (or) early second…I’m just happy that I got picked by the Washington Commanders and (I’m) ready to get to work.”

In four years at Penn State, Dotson caught 183 balls for 2,757 yards and 25 touchdowns. 20 of those six-point snags came as an upperclassman.