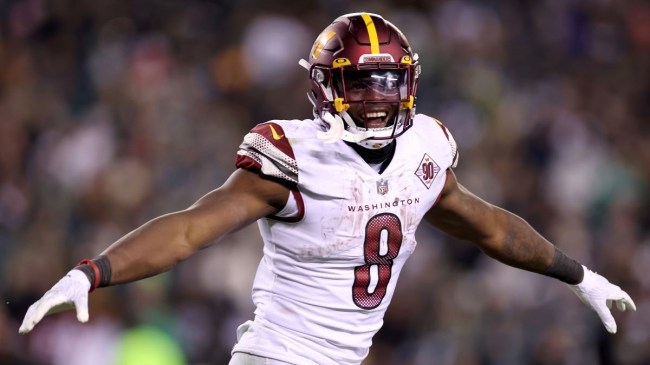 Washington Commanders running back Brian Robinson Jr. has had one of the most interesting rookie seasons in NFL history. It’s not that Robinson has been particularly outstanding. Sure, he’s been good. But nothing he’s done numbers-wise makes you bat an eyelash.

Instead, it’s all that’s gone on around Robinson’s rookie year.

The Commanders selected the Alabama product 98th overall in the third round of the 2022 NFL Draft. But before he could even step onto an NFL field for his first career game, Robinson’s life was at risk. He was shot twice as part of a carjacking in the Washington D.C. area. Thankfully, Robinson was not too seriously injured and he returned to Coammanders’ practice shortly thereafter.

Robinson then made his triumphant return and NFL debut against the Tennessee Titans on Oct. 9 in the coolest way possible. He was named the team’s starter four days later against the Chicago Bears and hasn’t looked back.

The rookie has racked up 467 yards and two touchdowns on 126 carries thus far. He also has six receptions for 27 yards and a touchdown. More importantly, Washington is 6-2 since his return and currently sits at 7-5 as well as in the final Wild Card spot in the NFC.

Robinson had the best performance of his young career on Sunday, rushing for 105 yards on 18 carries in a 19-13 win over the Atlanta Falcons. To celebrate, he donned a comically large Commanders hat after the game.

Brian Robinson said his friend has a “big hat” company. “If you want a big hat, let me know.” pic.twitter.com/KXm3GCJWO1

Now, why exactly anyone would want a comically large had I do not know. But Robinson did, and apparently, so do many others!

TMZ reports that Robinsons’s plug led to a skyrocket in sales for the big hat company.

Noggin Boss — the company that sells big hats starting at $75 — tells us the impact was immediate … with Monday being one of the biggest days in the brand’s history.

If the look seems familiar, Noggin Boss co-founders Gabe Cooper and Sean Starner appeared on “Shark Tank” earlier this year. The guys were seeking $50k for 25% of the company … and ended up sealing the deal with Daymond John for 30%!!
Robinson’s hat — customized with the Commanders’ logo — was a gift from a family friend … and the dude almost certainly started a trend in the sports world, with teams even photoshopping big hats onto their players. – via TMZ

Can’t say that I would ever spend $75 on any hat, less yet one that looks like something out of the movie Space Balls. But it’s always good to see a small business succeed.