Washington QB Dwayne Haskins Stripped Of Captainship By Team, Fined $40k For Going To Strip Club Without A Mask 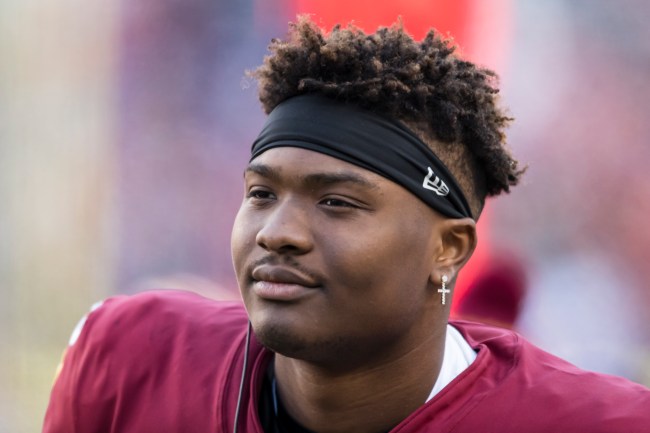 Washington QB Dwayne Haskins is starting to get penalized for violating the NFL’s Covid-19 protocols over the weekend.

Earlier this week photos showing Haskins partying at a strip club while maskless made the rounds on the Internet which led to fans and media members to criticize the young QB.

Dwayne Haskins was finally back as a starter [due to injury] and after losing to the #Seahawks, apparently decided to party at a strip club.

The team is aware of the posts and are in contact with the league while handling it internally, per @NickiJhabvala pic.twitter.com/z5uYHTQJ19

According to NFL.com’s Ian Rapoport, Haskins has been stripped of his captainship and has been fined $40k, which is the highest fine given to a player for violating the NFL’s Covid-19 protocols this season as a result of the strip club visit.

Source: Washington Football Team QB Dwayne Haskins’ captainship was taken away following his COVID-19 violation that included being photographed at a strip club without a mask. His teammates had voted him a captain in camp. This is part of the internal punishment for Haskins.

Washington QB Dwayne Haskins was fined $40K by the team for COVID-19 violations after he attended a strip club without a mask, source said. A significant amount. This is the largest known fine for a player for a COVID violation – more than half of Haskins’ weekly paycheck.

From NFL Now: Washington QB Dwayne Haskins lost his captainship and was fined $40K by the team. But it's up in the air whether he starts this week. pic.twitter.com/YvKIvTVpqx

Haskins apologized for his lapse in judgment on Tuesday night.