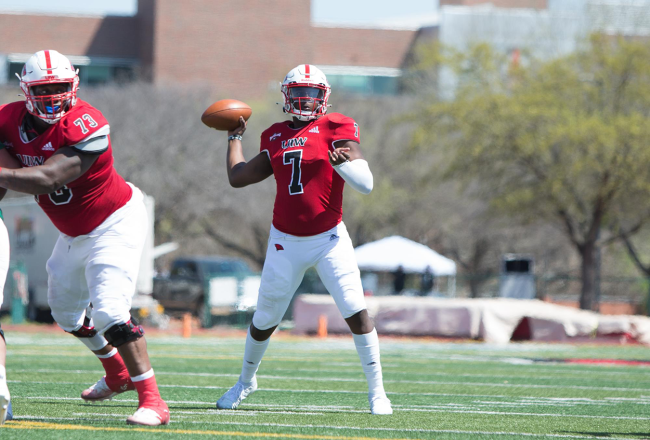 University of the Incarnate Word Athletics

Washington State football received a massive commitment at quarterback during the offseason. JUCO transfer Cameron Ward chose to play for the Cougars in 2022 over Ole Miss, among others and it reportedly cost nearly six figures.

Although Ward may not be a household name for non-obsessive college football fans, he should be. It was a huge get.

Ward was the fourth-highest rated transfer quarterback during this cycle after tearing it up at FCS program Incarnate Word last year. During the 2021 season, Ward threw for 4,648 yards and 47 touchdowns with only 10 interceptions, which is just absurd, and he also has some speed to him.

He’s like watching a create-a-player in a video game, take a look:

Out of high school, Ward did not have any FBS offers. He played in a triple option offense and simply did not have enough tape throwing the ball to get a look.

As a result, he ended up at Incarnate Word. In his first and only season as the primary starter, Ward completed 65 percent of his 590 attempts for an average of 7.9 yards per attempt.

He stands 6-foot-4, 220 pounds and has an arm that was sought after by Ole Miss, Houston and Washington State in particular. In the end, he went with the Cougars.

In the new era of NIL, players are able to be enticed to a particular school by financial packages that could be in place upon their enrollment. It isn’t directly pay-for-play, which is against the rules, but it’s basically the same thing and the school itself is not involved— it’s all boosters.

Canzano reached out to a member of Washington State’s ‘Cougar Collective’ and confirmed that the NIL entity put together a $90,000 package for Ward. His deal includes an apartment in Pullman, use of a pick-up truck from a booster-owned car dealership and $50,000 in cash in exchange for promotional appearances.

The NIL deal allows him not to worry about transportation or housing and gives him $50k in walking-around money. While we have seen numbers greater than $90,000 for other deals around the country, that’s not bad for a guy who did not have a single FBS offer just two years ago and is playing for a Pac-12 school that doesn’t have the alumni base or financial backing of other schools in the conference and around the country.

It’s also quite the deal for Washington State.