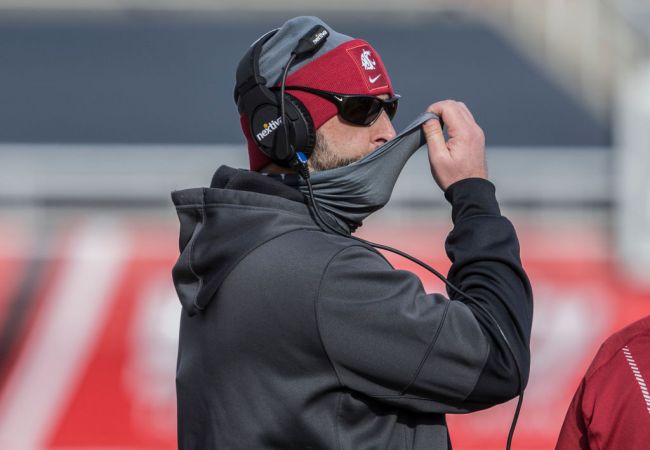 Nick Rolovich is OUT as the head football coach at Washington State after refusing to receive the COVID-19 vaccine. Rolovich had applied for a religious exemption that was denied ahead of Monday’s deadline for all Washington state employees.

The 42-year-old was fired with cause and WSU athletic director Pat Chun met with the players to break the news on Monday evening— if Twitter hadn’t first. Rolovich had only been with the Cougars’ program since January 13, 2020, which makes this even more wild.

Rolovich was forced to skip Pac-12 Media Day back in July because of the vaccine policy. However, a month later, he walked back his stance and said that he would follow Washington governor Jay Inslee’s mandate and get vaccinated.

But he never did. And now he is unemployed.

Inslee installed the mandate back in August when he saw the number of positive delta variant cases soaring. It required all government employees to get the vaccine or face termination.

Rolovich and multiple members of his staff did not get granted a religious exemption and were terminated.

Because he was fired with cause, the California-native will not collect a buyout. Prior to being let go, he was the state’s highest-paid employee at a salary of more than $3 million per year.

The ripple effect of this decision will be felt throughout college football, as there is a new opening in the Pac-12. It also could get very ugly from a litigious standpoint, depending on what exactly Rolovich’s exemption was based on.

Buckle up, because it is very likely about to get juicy.

Washington State was 1-3 under Rolovich last season but on a three-game winning streak in 2021. His interim replacement has not been named.

As is with anything, the internet had jokes:

Rolovich after Saturdays game vs this afternoon pic.twitter.com/CYNx8Oquv1

It’s a fight in the Nick Rolovich comments pic.twitter.com/DljJHOwKN8

Rolovich trying to find someone to blame: pic.twitter.com/AGop3L6e5A

"We should take Pullman and push it 8 miles East" -Nick Rolovich pic.twitter.com/2oBaYPvqMD