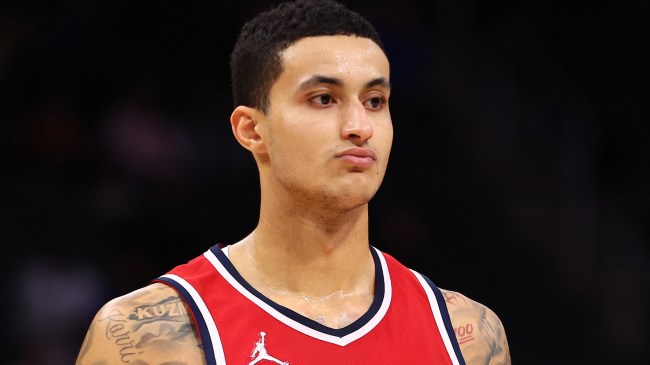 There are a number of NBA players who’ve found themselves drawn to the world of fashion and have a tendency to use the tunnels and hallways inside arenas as de facto runways to show off their latest ‘fit.

That includes Washington Wizards forward Kyle Kuzma, who turned plenty of heads when he modeled a puffy skirt on an actual runway during Puma’s showcase at New York Fashion Week last year. However, the man who chatted with us about his sartorial philosophy prior to that event is certainly no stranger to eccentric clothing.

In 2021, the man who started networking with various designers in Los Angeles after making his NBA debut with the Lakers in 2017 truly outdid himself with the laughably oversized pink sweater he donned ahead of a game against the Hornets.

When you're off to one of the best starts in franchise history, you get to wear whatever you want😂@kylekuzma | #DCAboveAll pic.twitter.com/2drVu8PpGg

He was roundly dragged by fans as well as some players who bestowed the “Brick” label upon the massive jawn, but it looks like he might be getting the last laugh.

Prior to the start of the current NBA campaign, the Wizards announced they’d be immortalizing Kuzma’s sweater with a bobblehead giveaway scheduled for their contest against the Knicks on January 13th. That day has officially arrived, and now, we’ve got our first official look at the freebie in question after the franchise posted a picture of the amazing keepsake that will be handed out to 10,000 fans at Capital One Arena on Friday night.

According to The Washington Post, Kuzma and the Wizards weighed a number of potential outfit options while working with the design agency behind the bobblehead.

However, it’s hard to believe any of the other possibilities on the table were ever seriously considered when you based on the iconic nature of the piece of clothing that inspired what will undoubtedly be a hot-ticket item on eBay by the time the weekend rolls around.