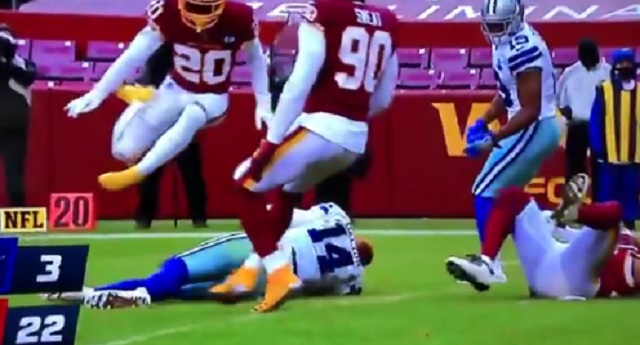 Jon Bostic can expect to get a call from the league on Monday morning.

During Sunday’s Cowboys-Washington game, Bostic was ejected after he delivered a brutal hit to the head on Cowboys QB Andy Dalton who had already given himself up on the play.

The Cowboys 3rd string QB is now warming up as Andy Dalton took a hit to the head while sliding. pic.twitter.com/HxONR9a6Be

Dalton was carted off the field and Cowboy’s third-string QB Ben DiNucci replaced him.

Fans blasted Bostic for the hit.

I don’t condone violence, but the fact that NO #Cowboys Offensive lineman tried to go after Bostic after that dirty hit on Dalton is….. telling.

Bostic needs a suspension in addition to an ejection https://t.co/d0HPIfcDpn

Oh man that hit by Bostic….hope Dalton is OK, but that is the hit that needs to be out of the league…..

Bostic has been in the NFL for 8 years. He should know better than that. Just a terrible dirty play in a game they are way ahead in as well.