UFC Shenzhen: How To Watch Andrade vs. Zhang On ESPN+ And Why It’s Going To Be Worth Staying Up All Night 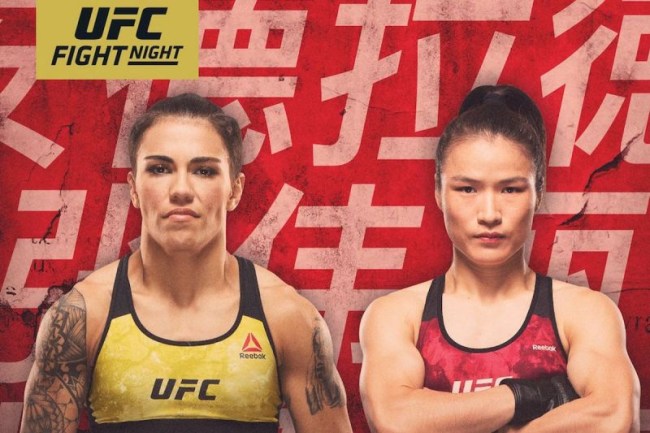 A sport of wild knockouts and slithering chokes and submissions, MMA is ideal for the hardcore sports and entertainment fan — the very type of fan who will stay up all night or wake up hella early to catch some action on ESPN+.

This weekend’s UFC Shenzhen card perhaps epitomizes that hardcore spirit, as the start time is a bit out of the ordinary for the North American audience. But there’s a title on the line and a lot of great action from the new wave of Chinese UFC fighters, so if you’re down to go the distance, here are a few reasons to tune into UFC Shenzhen on ESPN+.

While this will only be the third UFC event on the Chinese mainland, along with three previous shows in the Macau special administrative region, the UFC actually began investing in China close to a decade ago, when they set up an office in Beijing.

It’s been a long time coming, but the UFC might finally have an opportunity to crown a Chinese champion, which could be a major deal for the future of the sport of mixed martial arts. It all kind of comes down to strawweight title challenger Zhang Weili, who is taking on champion Jessica Andrade in the UFC Shenzhen main event.

Thus far, Zhang Weili has looked pretty spectacular inside the Octagon. In fact, the UFC was almost forced to give Zhang the title shot because everyone else was ducking her, avoiding a dangerous opponent and the long haul flight to China.

Andrade is no chicken, however, and she’s embraced the opportunity to go spoil the UFC’s watershed moment in China.

This one is worth tuning in for. Also, for anyone planning on watching UFC 242 on September 7 might consider signing up for ESPN+ a week early to catch this UFC Shenzhen strawweight title fight.

While the UFC Shenzhen main event carries the majority of the appeal for this card, the co-main event between China’s Li “The Leech” Jingliang and Brazil’s Elizeu Dos Santos is a pretty important bout in the welterweight division.

Li has been the most successful Chinese fighter in the UFC to date, going 8-3 since his Octagon debut in 2014. Dos Santos, currently ranked fourteenth, has won seven straight bouts, including his last three via stoppage, since dropping his very first fight in the UFC back in 2015.

Both of these fighters are on the cusp of major breakthroughs in the welterweight division, and with such high stakes, there’s certain to be major action.

Additionally, Li has never lost a fight on the Chinese mainland. Dating back to his years on the domestic Chinese MMA circuit, Li has gone 5-0 on the mainland but never before has he faced a challenge quite like Dos Santos, who can strike and grapple and put on a mesmerizing capoeira show.

Lv Zhenhong has been itching to fight in the UFC since he was 17. Seriously, before he was even old enough to fight professionally, Lv was adamant about his eventual rise to the top of the MMA world, so it’s kind of wild that it’s taken this long.

There’s a bit of a backstory to Lv’s recent signing — he’s just inked a contract to be a late replacement on the UFC Shenzhen card. Years ago, he was actually picked up by the UFC for an event in Macau; however, he was still under contract with a local promoter who blocked him from fighting with the UFC. He was just too hot a commodity at the time to let go.

Now a local champion for the Wu Lin Feng promotion in China, Lv is all about finishing fights, having earned stoppages in 12 of his 16 professional wins (8 knockouts, 4 submissions).

This guy is a straight action fighter and one of the most promising Chinese brawlers in mixed martial arts.