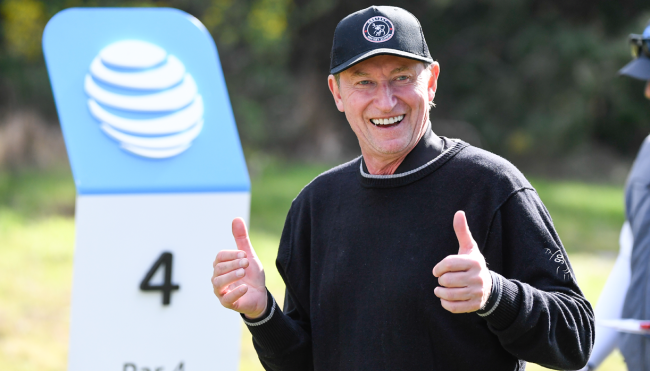 Wayne Gretzky is being sued for $10 million over a claim that The Great One lied about losing weight by just chewing a certain brand of gum.

The nine-time NHL Most Valuable Player, who is estimated to be worth around $250 million, is being sued by a man named Steven Sparks, the creator of OMG (Overeating Management Gum).

According to legal documents obtained by TMZ, Sparks hired Wayne Gretzky’s wife Janet to be a spokesperson for OMG gum, a “natural gum used to manage weight.”

"The reality is, women and men want to lose weight and keep it off – but are often too busy to stick with most all diets which are difficult-to-maintain and tough to comply with dosages plus directions for use."
-Janet Gretzky
Actress & Businesswoman-Entrepreneur pic.twitter.com/Lx1TrBnn0K

A 2018 press release stated, “Janet [Gretzky] and her development team have created a great-tasting product powered by SuperCitrimax, the gold standard of Garcinia Cambogia which is clinically proven to reduce appetite while boosting fat-burning. OMG Gum also utilizes Fertin’s revolutionary tri-layered technology for effective delivery of SuperCitrimax. In addition, OMG’s SuperCitrimax™ helps control appetite by releasing Serotonin, a neurotransmitter to help reduce hunger and create a feeling of fullness.”

All was going well, according to Sparks, until Wayne chimed in with a lie about the gum. Sparks says Wayne claimed that after chewing the gum for around two months he lost 35 pounds.

He also claims Gretzky made up that lie in order to boost the company’s stock price “which he surreptitiously purchased under his family’s name.”

Later, after Gretzky allegedly admitted that he lied about the effect of the gum on his weight loss, the company went belly up, costing Sparks $10 million. Now, Sparks wants Wayne to reimburse him for his $10 million investment.

Reactions to this very unusual lawsuit against the five time Stanley Cup MVP have been rather comical.

So he created a gum that didn't work and reinvested monies when the lie told made the business grow? I'm so confused on how this is written lol https://t.co/2FInBhqSt8

Hey, you miss 100 percent of the shots you don’t take, right?